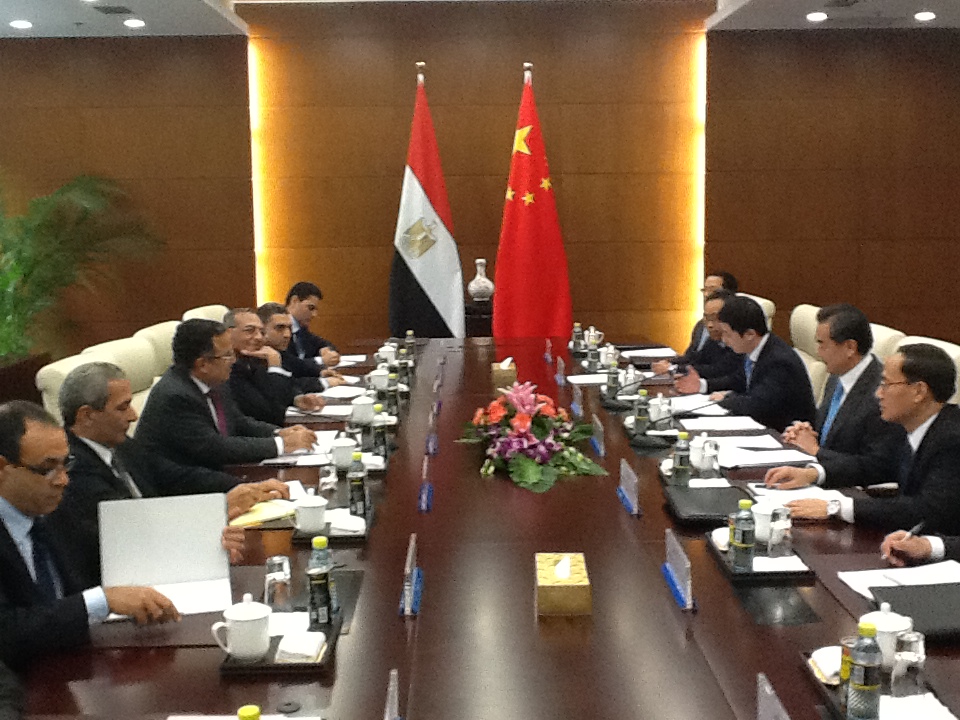 Fahmy arrived in China on Saturday as part of a six-day tour of Asia. He is expected to visit Japan and South Korea next.

Yuanchao stated that China has encouraged Chinese companies to further invest in Egypt, according to a statement released by the Egyptian Ministry of Foreign Affairs. He added that China “entirely rejects any foreign intervention in the Egyptian people’s choices,” and that developing relations with Egypt is a “strategic choice”.

The vice president reportedly said China was ready to upgrade its relations with Egypt in political, economic, commercial and military fields and on the official, parliamentarian and popular levels.

China has eased travel warnings for its citizens to Egypt ahead of the Fahmy’s second visit to the Asian continent.

Fahmy reiterated Egypt’s respect for China’s “supportive” stance, and said Egypt is keen on diversifying its foreign options without affecting its already-existing relations, which “would cement the independence of state’s decisions.”

Mohamed Fayez Farahat, head of the Asian studies programme at the Ahram Centre for Political and Strategic Studies, said that Fahmy’s visit to China comes at a very important time.

Farahat said that relying on a single “international pole” no longer serves Egypt’s interest. He added that the state must build balanced relations with all international powers.

Egypt especially desires to upgrade its economic and commercial ties with China, Fahmy said. He added that both countries have common principles regarding several regional and international issues, including: non-intervention in states’ domestic affairs, respecting international law, rejecting the use of armed force outside the auspices of the United Nations and pursuing the non-proliferation of nuclear weapons. Fahmy said Egypt is looking forward to intensifying bilateral talks with China regarding the reform of international relations and the United Nations.

Fahmy told Yuanchao that the domestic changes taking over Egypt run deeper than changing leadership and governments; it is a “comprehensive societal makeover led by the Egyptian people to establish a modern political, social, economic and democratic system which achieves justice and good governance.” The foreign minister added that such aspirations could only be achieved through peaceful dialogue.

Fahmy went through the “roadmap” announced by general commander of the armed forces Abdel Fatah Al-Sisi following the ouster of former President Mohamed Morsi, stressing the people and the government’s insistence to see the roadmap through.

Farahat said that the world is currently shifting from uni-polarity to multi-polarity, with the rise of Russia and China’s international presence.

“Egypt has to be part of this shift,” Farahat said. “There is a responsibility on Egypt to establish bridges of understanding with leading powers, most notably China.”

Farahat nevertheless added that Egypt’s new approach shouldn’t affect its ties with the United States. “We still have strategic interests with the US which cannot be overlooked,” he said.

There has been much suggestion of late that Egypt itself has been seeking to move away from the influence of the United States following a decision from Washington to suspend a large portion of military aid. A high-level visit by Russia’s ministers of Defence and Foreign Affairs and the potential for a new arms deal to fill the void left by the American withdrawal only gave further strength to this view.

Egypt’s Ministry of Foreign Affairs has denied both the existence of an arms deal with Russia and that Egypt is seeking to replace any country with another. Upon assuming his role as minister, Fahmy announced that Egypt’s relationships with all countries would be reassessed and has also stated that Egypt is looking to re-position itself as an Arab country with African roots.