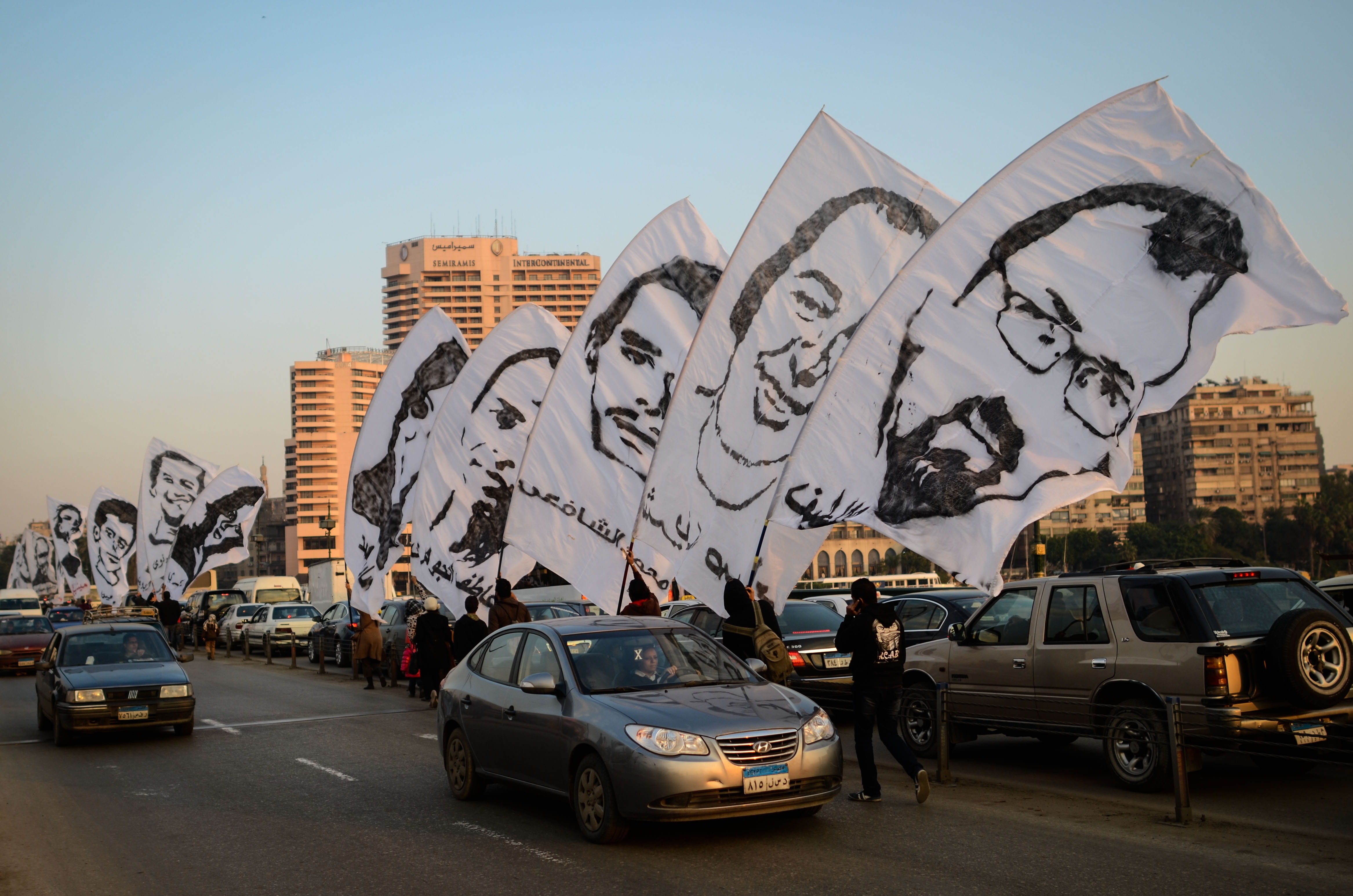 Approximately 500 people marched on Monday from Saad Zaghloul Square to the cabinet building on Qasr Al-Eini Street to commemorate the second anniversary of the 2011 “cabinet clashes” in which 12 died and 815 were injured, according to the Ministry of Health.

The demonstration reached the cabinet building, having marched across the Qasr El-Nil Bridge and along the Nile Corniche, before marching down Qasr Al-Eini Street. The protesters stood outside the cabinet building for around 45 minutes, making lewd gestures towards the police and chanting against the army.

Prominent Al-Dostour Party member Khaled Dawoud, who joined the march, told Daily News Egypt that he was marching in commemoration of those who died two years-ago. “Impunity for police and army officers continues and has done so since the days of [former President Hosni] Mubarak,” he said, adding that the march had a dual purpose in that it was also violating the controversial Protest Law. “This is a peaceful march and if there is any violence it would not have come from our side.”

Several police personnel were photographing protesters, including one based on top of cabinet building.

A late Sunday statement from the “Families of the Martyrs of Cabinet Clashes” group read that they did not ask for an approval from the Ministry of Interior for their Monday protest commemorating the second anniversary of the clashes. This was also announced over a megaphone.

The Ministry of Interior media centre told Daily News Egypt that the march had been granted a permit under the new Protest Law. Haitham Mohamedein, one of the organisers and member of the political bureau of the Revolutionary Socialists insisted that no permit had been requested. He added, “If the ministry is saying a permit was granted then they are looking to avoid clashes ahead of the referendum [on the draft constitution].”

Protesters gathered at 4pm and marched to the cabinet building on Qasr El-Aini Street. The protest was organised by several factions, the most notable being the Revolutionary Front, 6 April Youth Movement, Warakom Bel Taqrir, Misr Al-Qawia Party and Askar Kazeboon (The military are liars).

The statement from the families said the protesters “reject Muslim Brotherhood and Tamarod [Rebellion] movement participation in their protest.”

However, Tamarod announced that they would participate in commemorating the anniversary of the clashes. “Our main goal is to make everyone remember that [former SCAF leaders] Hussein Al-Tantawi and Samy Annan committed crimes against the revolution and made a dirty and unsuccessful deal with a faction that betrayed the nation, the Brotherhood, which spilled the blood of the purest youth,” the movement said in a statement.

Tamarod founding member and spokesman Hassan Shahin is one of those injured during the clashes.

The protests carried into the early evening, with crowds thinning out before the remainder was dispersed at approximately 8pm, with 10 protesters being arrested, reported state-owned Al-Ahram.

Brotherhood-affiliated movement Students Against Coup (SAC) also held marches at Ain Shams University, with their announced destination being the Ministry of Defence.

MENA also reported that security enforcements were also installed in the presidential palace in Heliopolis, which is six kilometres away from the Ministry of Defence headquarters in Abbasiya.

The 2011 cabinet clashes ignited when demonstrators organised a sit-in at the cabinet headquarters protesting the appointment of Kamal Al-Ganzouri as Prime Minister by the then-ruling SCAF. The military police attempted to disperse the sit-in, resulting in violence which lasted four days and caused scores of injuries and deaths.