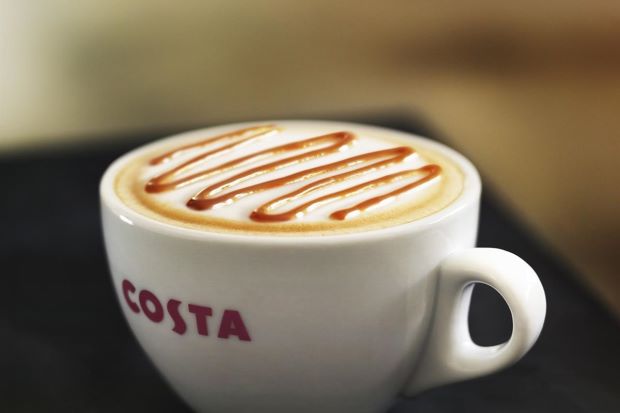 Reuters- Not content with an expanding number of stores at home and abroad, Britain’s Costa Coffee is hoping a new self-service machine crafted by Ferrari designers and Harry Potter website techies will help it grow in offices and similar locations.

Britain’s largest coffee chain, part of Whitbread Plc , has grown rapidly on the back of rising demand for affordable coffee treats and aims to double sales to £2bn ($3.3bn) by 2018, through expansion at home and abroad in places such as China.

Costa has more than 2,770 stores worldwide and has achieved 44 quarters of “like-for-like sales” growth in Britain, helping Whitbread shares rise %43 in a year.

In addition to increasing the number of chains, Costa also plans to grow its “Costa Express self-service machines” division, which give it a presence in places where a full store doesn’t fit.

“Costa Express,” born in May 2011 after the acquisition of a company called Coffee Nation, has already grown from 877 self-serve machines to some 3,000, a target originally set for 2016 but reached after putting around 2,500 machines into UK retail stores and gasoline station forecourts, including those run by Royal Dutch Shell Plc.

Now the company wants to reach 6,000 machines in the UK by 2018, but to do so is relying on a new, smaller and more attractive machine named “Marlow” to grab the attention of coffee lovers in locations like offices, universities and hospitals.

According to research group Allegra Strategies, consumers are drinking twice as many cups of coffee in the workplace as in coffee shops, while Costa has put the UK market at around 20,000 possible machines.

Costing £13,000 to make, broadly in line with its predecessor, the new machine can churn out some 240 different drinks (versus 32 currently) and has a sleeker design courtesy of Italian design specialist Pininfarina, famous for designing cars such as the Ferrari Berlinetta.

The machine’s control screen was developed by gaming specialists Atomhawk, who helped create Pottermore, the interactive site for Harry Potter fans, while customers will also smell coffee and hear coffee shop sounds mixed by eMixpro – a firm which has worked with likes of U2 and Katy Perry.

Costa already has nearly 30 of the new machines on trial in Britain, France, Denmark and the UAE as it tries to grow its international business, too.

The current Costa Express machines make £6,000 profit a year and the business contributed 7ml British pounds of profit in 2012/13 before overheads and marketing costs.

The Costa business overall makes around a third of the £2bn in revenue chalked up by Whitbread, which also includes Brewers Fayre restaurants and Premier Inn hotels, where Whitbread aims to expand its UK rooms by 45% to 75,000 by 2018.