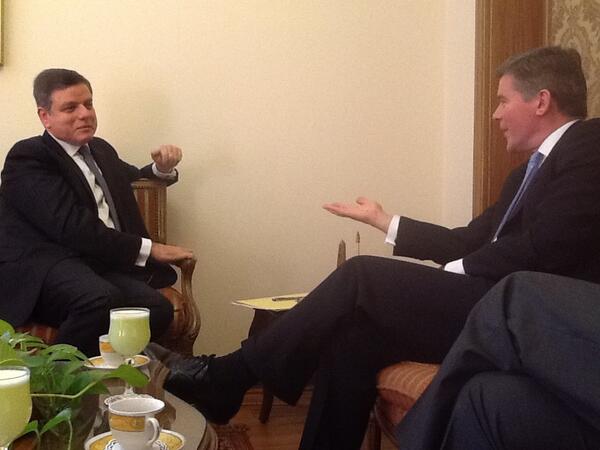 During his visit, Robertson met members of the interim Egyptian government and members of civil society and the country’s religious leadership.

Robertson met with Assistant to the Minister of Foreign Affairs for European Affairs Hatem Seif Al-Nasr on Monday. The two emphasised Great Britain and Egypt’s close ties in the fields of trade, investment, and tourism, according to a statement issued by the Egyptian Ministry of Foreign Affairs.

The diplomats also discussed cooperation between the two nations to recover assets that had been smuggled into the UK from Egypt. Seif Al-Nasr and Robertson also discussed Egypt’s transitional roadmap, and the Egyptian ministry said that “the British side emphasised its support for Egypt in its efforts to combat terrorism and extremism, including ongoing efforts to root out terrorist outposts in North Sinai.”

Robertson and Seif Al-Nasr also discussed regional issues including Syria and “the importance of the effort to provide the appropriate environment for the success of the Geneva 2 Conference”, as well as ongoing peace negotiations between Palestine and Israel and “the importance of supporting the efforts of United States Secretary of State John Kerry aimed at reviving [the talks].”

On Monday he met with Minister of Tourism Hisham Zaazou. The United Kingdom recently lifted its travel restrictions to Cairo, Luxor, and Aswan.

He is scheduled to leave Egypt on Wednesday.