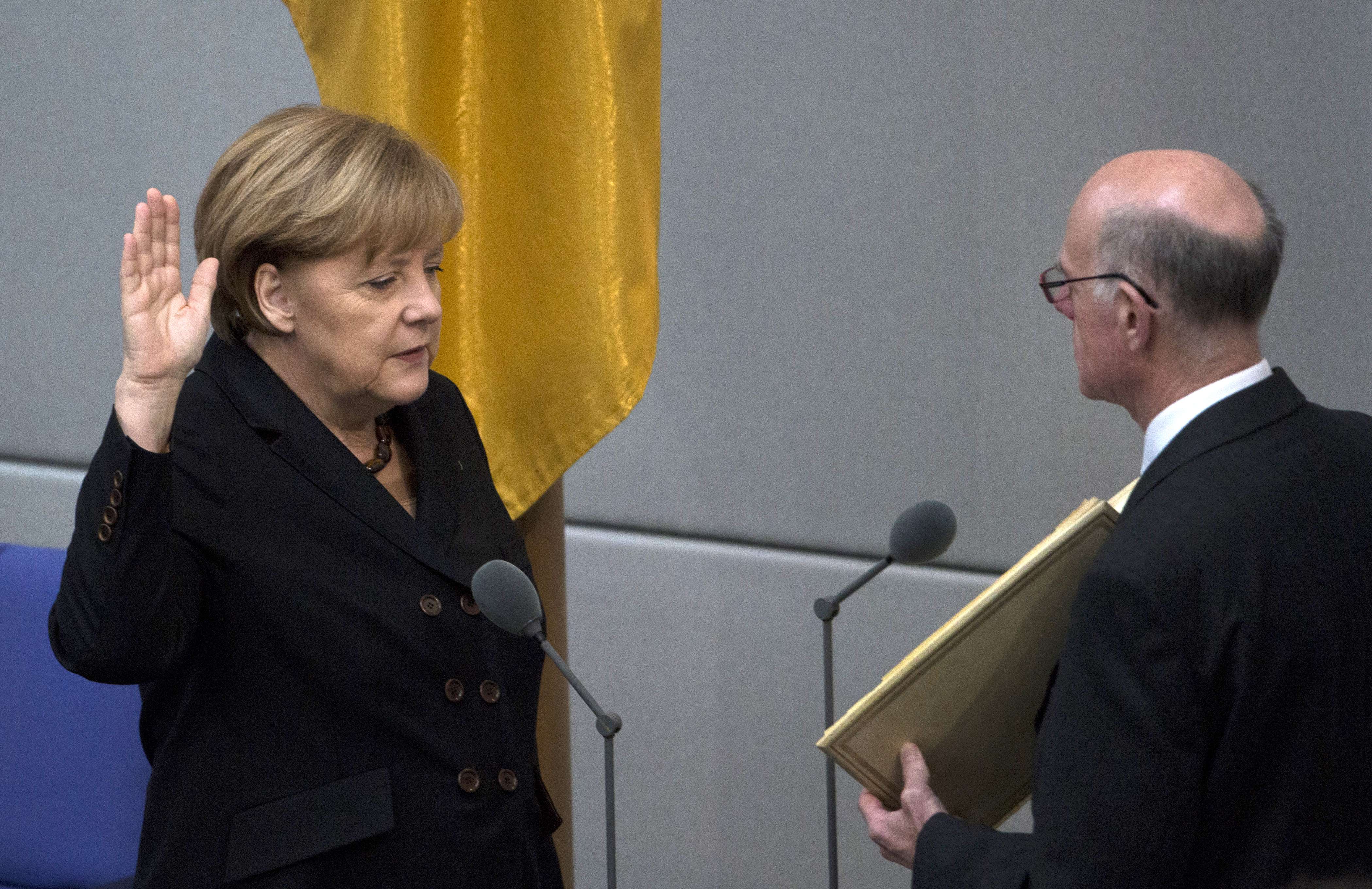 German Chancellor Angela Merkel, a pastor’s daughter who grew up under communism, rose to become the world’s most powerful woman, governing Europe’s biggest economy and setting the political tone on the continent.

Dubbed Mutti, or Mummy, at home for her reassuring and no-nonsense style, the trained scientist is hugely popular for safely steering Germany through global financial turmoil but reviled in crisis-hit countries for championing the bitter medicine of reform and

Germany’s first female chancellor scored her biggest triumph in September 22 elections when her star power swept her conservatives to a third term — a feat previously achieved only by fellow conservatives Konrad Adenauer and Helmut Kohl, the father of national unity.

On Tuesday she was voted back in by parliament, where she commands a large majority, having forged a ‘grand coalition’ government with her defeated rivals the Social Democrats.

In this year’s campaign, her Christian Democrats erected a giant billboard in Berlin with a picture of Merkel’s hands held in her trademark diamond-shape gesture. Quite simply, the mighty Merkel had become the message.

After eight years at the helm, and three as the go-to leader in the eurozone crisis, Merkel was rewarded by voters for navigating the country through turmoil and leaving it stronger than before.

But abroad, angry protesters in Athens, Lisbon and Madrid have blamed her for budget cuts they said were choking off desperately needed growth, some brandishing caricatures of Merkel in Nazi garb.

“I am determined to see Europe emerge stronger from the crisis,” she intones regularly. “Germany can only be strong with a strong Europe.”

Critics have charged that the ever-reserved Merkel has perfected the art of saying little and avoiding both offence and commitment, while lulling the prosperous country into a false sense of security.

“You don’t have to expect any threatening new tacks from her, no tough decisions for or against. She is perfectly predictable in her flexibility, and the risk-averse electorate loves it. Merkel is us, and we are Merkel.”

Her late biographer Gerd Langguth found a “sphinx-like quality” in her, allowing Merkel to quietly triumph in the most unlikely circumstances.

Merkel has dispensed with rivals in her conservative Christian Democratic Union (CDU) despite being a misfit in a party of mainly Roman Catholic family men fromGermany’s wealthy southwest.

A twice-married childless Protestant raised in communist East Germany, she has become the unchallenged conservative leader of her generation.

Born Angela Kasner on July 17, 1954, she left Hamburg in then West Germany a few weeks after her birth when her Protestant preacher father decided to tend to the flock in the East.

Locals remember her fierce intellect and discretion as a Christian in a totalitarian state.

She earned a physics doctorate, married and divorced fellow student Ulrich Merkel, and stayed out of politics until the Berlin Wall fell in 1989.

In 1990 she joined the CDU and won her first parliamentary seat.

Then chancellor Kohl made her minister for women’s issues and later environmental affairs, and bestowed on her the fond but patronising nickname “the girl”.

But in 2000, the frumpy newcomer rose to the head of the CDU when she alone had the courage to tell Kohl to quit as party chairman over a slush fund scandal.

In 2005 she unseated Social Democratic (SPD) chancellor Gerhard Schroeder after his seven years in power, becoming Germany’s first female chancellor as well as its youngest.

She is also the only woman to lead a major European power since Margaret Thatcher of Britain.

During her first term, Merkel presided over a loveless “grand coalition” between the conservatives and their traditional rivals, the SPD — a tie-up she is now repeating in her third administration.

Forbes magazine has named her the world’s most powerful woman for eight of the past 10 years.

Merkel was a staunch defender of nuclear power until Japan’s Fukushima disaster in 2011 prompted a dizzying about-face that saw her pledge to phase out all ofGermany’s reactors by 2022.

A lover of German opera, French red wine and walking holidays in the Italian mountains, Merkel has repeatedly pointed to the iconic Swabian housewife — a paragon of thrift and self-control — as her model.

She shuns the trappings of power, wearing boxy trouser suits, spending precious free weekends in her spartan country house north of Berlin, and doing her own shopping at a discount supermarket.

She remarried in 1998. Her chemist husband Joachim Sauer so rarely appears in public that he is nicknamed “The Phantom of the Opera”.