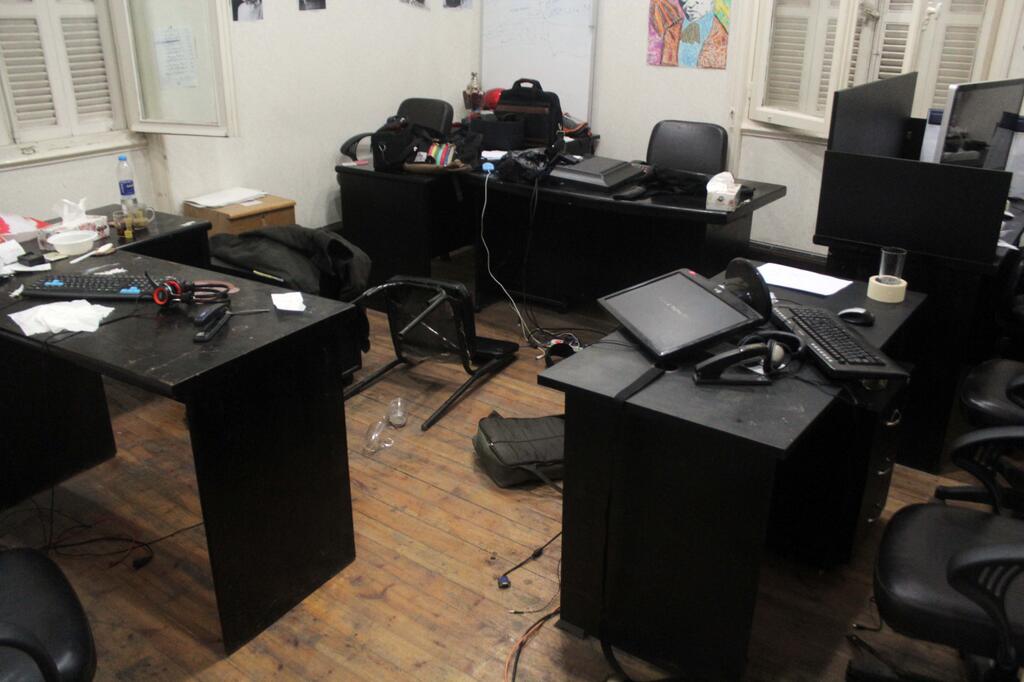 Five activists were released Thursday morning after they were detained during the Homeland security raid against the Egyptian Center for Economic and Social Rights (ECESR) Wednesday night. ECESR has supported striking factory workers and defended activists at trials.

The activists released were: ECESR Lawyer and Vice President of the Criminal Justice unit Mahmoud Belal, Photographers Mostafa Eisa and Hossam Selim, along with Sherif Mansour and Sayed Mahmoud, the only detainee who hasn’t been yet released is Mohamed Adel, one of the volunteers at the centre.

Adel, a prominent secular activist, is standing trial with activists Ahmed Maher and Ahmed Douma for violating the new protest law that restricts demonstrations. He had been on the run.  Maher and Douma are leaders of the April 6 movement that helped topple  Mubarak in 2011.

According to Gamal Eid, Director of the Arabic Network of Human Rights Information (ANHRI) who is following the case, the centre was raided by armed Homeland Security personnel dressed in plain clothes. Several computers and laptops were confiscated; six activists were detained and ECESR Lawyer Mahmoud Belal was assaulted by one of the officers after asking him for a warrant.

“ECESR is the most important centre working on the public sector corruption cases,” said Eid who added, “I believe that the reason behind this raid was the conference that is supposed to be held on Thursday.”

ECESR is holding a press conference on Thursday for the workers of several public sector companies such as; Shepherd Hotel, Elsewedy cables, Iron and Steel Company amongst others. After the press conference the released activists from ECESR raid will tell their testimonies about their detention.

Police had raided several foreign NGOs in 2011 after prosecutors accused them of receiving illicit funding from abroad.

Since the ouster of former president Morsi, the police have launched a blistering crackdown on his Islamist supporters, with more than 1,000 people killed in street clashes and thousands arrested. They have also begun to target secular activists who opposed Morsi and now criticise the military-installed government.

State media have repeatedly claimed that some rights groups form part of a “fifth column” that should be investigated.