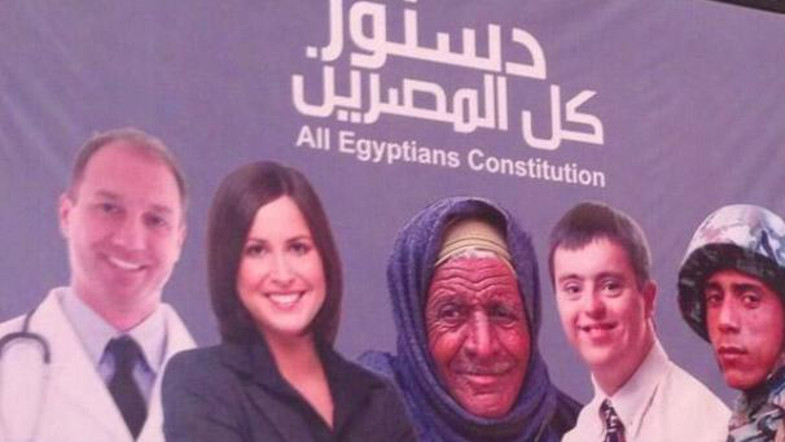 Amgad Abdel Ghaffar, head of the State Information Service, the  government’s media arm, has resigned amid controversy over a poster to promote a new draft constitution that featured images of non-Egyptians and misspelled “Egyptians” in Arabic, state media reported Wednesday.

Abdel Ghaffar had already apologised for the poster, which featured  Caucasian-looking images under the caption: “All Egyptians Constitution.”    State television said he had tendered his resignation.
The large poster, featuring a doctor, a woman, a peasant and a soldier, was  meant to capture a cross-section of Egyptian society.
But at least three of the images turned out to be of non-Egyptian models  featured in stock photographs on other websites.
The photographs appear to have been found using Google searches for “doctor” and “business woman.”
The banner also misspelled “Egyptians” in Arabic, as pointed out by one  journalist at the press conference held earlier this week to promote the  constitution ahead of a referendum in January.
Egypt’s military-installed government has billed the referendum as a key  step in a democratic transition following the army’s overthrow of Islamist  president Mohamed Morsi in July
Topics: constitution draft poster