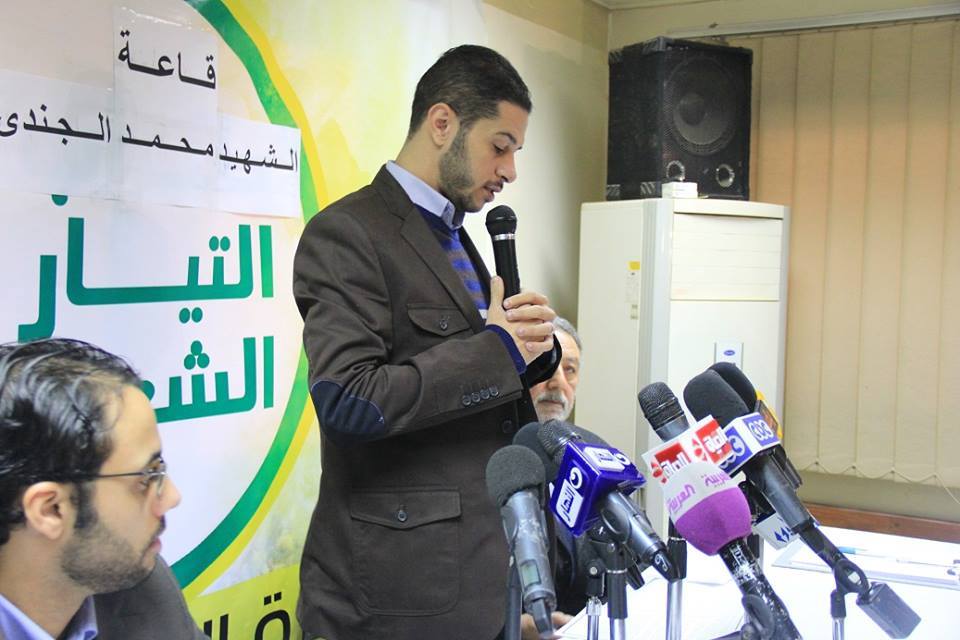 Political coalition Al-Tayar Al-Sha’by announced on Saturday that they would vote Yes in the upcoming referendum on the draft constitution and “called on Egyptians to do so”. The group also voiced their support of founder Hamdeen Sabahy in running for the presidency.

“Al-Tayar Al-Sha’aby appreciates the developments in the draft constitution, despite the fact that it does not fulfill the revolution’s ambitions, especially in the articles concerned with military trials for civilians,” the statement read. It meanwhile praised “the great developments” achieved by the draft constitution in the fields of rights, freedoms and transitional justice.

The coalition urged Egyptians to participate in the referendum, set to be held on 14 and 15 January, and not to “succumb to the campaigns of terror and fear held by the forces of terrorism.” Instead, the coalition said, Egyptians should vote ‘Yes’ as a first step in “the path of the revolution.”

Al-Tayar Al-Sha’aby also gathered 78 signatures from political and media figures asking interim President Adly Mansour to call for presidential elections immediately after the referendum, “which was the main demand of the great revolutionary wave of 30 June, and was also one of the demands of those who signed the Tamarod petition.”

The statement added that “the current circumstances in Egypt and the challenges the nation faces urge us to suggest ending the transitional period quickly by electing a president who can stop any domestic or international attempts to doubt the legitimacy of 30 June.” The statement also added that it is legally possible, according to the 3 July roadmap and the draft constitution, to hold the presidential elections before the parliamentary elections.

The coalition also announced their support for Sabahy in the upcoming presidential elections “as he is the most notable civil candidate from the revolution’s camp” the statement read, announcing that the coalition would initiate a “national dialogue” to form Sabahy’s electoral programme immediately following the referendum.

The statement described Sabahy as “the only candidate who can confront the Muslim Brotherhood and the former [Hosni Mubarak’s] regime, and who has a solid project aimed at freedom, social justice and national independence.”

Sabahy, who did not attend the press conference, is the founder of Al-Tayar Al-Sha’aby, which is an alliance of Nasserist parties formed in June 2012. The former presidential candidate announced on 25 November that he will run for presidency if a consensus is reached among revolutionary powers regarding his candidacy.

Sabahy meanwhile attended a press conference organised by the Free Egyptians Party on Saturday to announce its merger with Democratic Front party.

According to Free Egyptians party spokesman Ahmed Khairy, Sabahy called for a civil alliance to gain parliamentary majority in the upcoming elections and more mergers between civil parties.

The former presidential hopeful also urged Mansour to call for presidential elections immediately after the referendum. Khairy affirmed that Sabahy did not talk about running for the presidency during his speech in the press conference.

The merger has been in the works since 1 October, with Free Egyptians party spokesman Shehab Wagih promising for more mergers with parties that share “the same ideas and ideology”.

The Free Egyptians Party, a liberal organisation, was founded in April 2011 and gained 15 seats in the 2011 parliamentary elections under the umbrella of the Egyptian Bloc.

The Free Egyptians Party is strongly affiliated with Egyptian businessman Naguib Sawiris, being one of those who announced the establishment of the party on 3 April 2011.

The Democratic Front Party, which is also liberal, was founded in 2007 by former National Democratic Party high-ranking member Osama Al-Ghazali Harb and constitutional expert Yehia El-Gamal. The party failed to secure any seats in the former parliamentary elections.