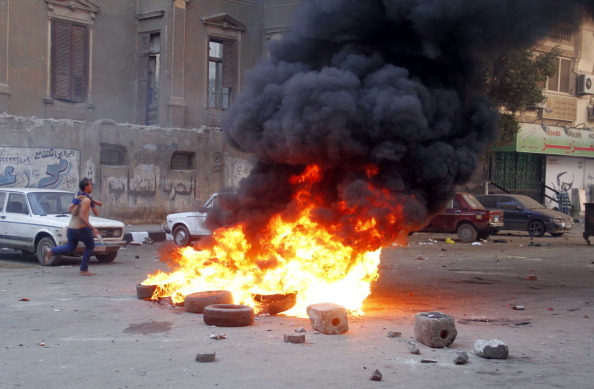 Clashes erupted in several governorates on Friday following protests by supporters of ousted President Mohamed Morsi under the banner of “our constitution 2012”, resulting in 37 injuries.

The Ministry of Interior accused Muslim Brotherhood protesters of organising demonstrations without notifying the authorities in advance. A new Protest Laws obliges protest organisers to notify the concerned security personnel with their plans at least three working days in advance. The ministry also stated that Muslim Brotherhood protesters blocked traffic and clashed with other residents in the areas where protests were held.

Clashes erupted in Nasr City and Gesr Suez, Cairo, where security forces arrested 25 protesters it accused of attacking forces with Molotov cocktails, firearms and birdshot. The ministry said it arrested three people in possession of one automatic rifle, two birdshot rifles and ammunition, adding that five police officers and three conscripts were injured as a result.

The Brotherhood’s Freedom and Justice Party claimed that police forces shot dead a resident of Gesr Suez neighbourhood during Friday’s clashing. Health Ministry Spokesman Mohamed Fatahallah nevertheless denied that any deaths occurred on Friday. He added that out of the 37 who were injured nationwide, only 16 remain hospitalised.

One of those injured was Bassem Mohsen, a prominent political activist who lost an eye during the 2011 Mohamed Mahmoud Street clashes. Mohsen was shot in the head during a Muslim Brotherhood protest in Suez on Friday and was then taken to Cairo where he was admitted at the New Qasr El-Aini Teaching Hospital. He remains in critical condition.

Ministry of Interior Spokesman Hany Abdel Latif denied that security forces dispersing the Suez protest were armed with automatic weapons. He said that masked assailants shot at the protesters, adding that this incident had occurred two weeks ago and that security forces are looking into it.

Clashes also occurred in Giza, where the Ministry of Interior arrested 18 “rioters” whom it accused of stalling traffic, attacking other residents and torching a police vehicle. The police also arrested a total of 42 “inciters and rioters” following Muslim Brotherhood protests in the governorates of Alexandria, Ismailia, Port Said, Damietta, Fayoum and Marsa Matruh.

The Anti-Coup Alliance, also known as the National Coalition to Support Legitimacy, called for week-long protests in support of the 2012 constitution following Friday’s protests. The alliance is made up of several political and Islamist movements who support Morsi.

They called on “revolutionaries” to continue “defending legitimacy” and warned against the “putschists’ use of violence and terrorism” against protesters.

The 2012 constitution was suspended by general commander of the armed forces Abdel Fatah Al-Sisi following Morsi’s ouster on 3 July. Interim President Adly Mansour appointed a 50-member Constituent Assembly to draft amendments to the suspended constitution. The assembly drafted a new constitution and submitted it to Mansour on 3 December. The interim president called for referendum on the constitution on 14 and 15 January.

The Freedom and Justice Party officially announced on Wednesday that it would boycott the upcoming constitutional referendum.