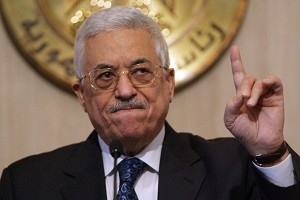 Mansour and Abbas discussed regional developments, the Egypt-backed reconciliation process between rival Palestinian factions as well as the latest updates on the ongoing Palestinian-Israeli negotiations, the Palestinian news agency reported.

Presidential spokesman Ihab Badawi had told state-run MENA ahead of the meeting that it comes at a time when Egypt is regaining its regional position and role, which is supportive of the Palestinian cause and the right of Palestinians to form a state.

The Palestinians and Israelis had agreed to come to the negotiating table in July following US diplomacy efforts. The talks have a timeframe of nine months.

Spokesman Badawi said that Egypt “welcomes the resumption of talks”, even though it has doubts about the results they will lead to. Egypt has long maintained that despite scepticism, it still supports the talks.

During a press briefing on Friday, US State Department spokeswoman said, “We remain focused on achieving our objectives in this timeframe.” She added, “We have long said that the only way to achieve a final status agreement is through direct negotiations.”

On the Palestinian side, the meeting was attended by Palestinian Foreign Minister Riyad al-Maliki, Chief Palestinian Negotiator Saeb Erekat and Palestinian Ambassador to Egypt Barakat Al-Farra.

Egypt’s foreign ministry has reiterated, on several occasions, Egypt’s position on Palestinian-Israeli talks: “That the Palestinian-Israeli negotiations are serious, that they follow the agreed timetable and that they lead to the establishment of an independent, sovereign, and viable Palestinian state based on the June 1967 borders with East Jerusalem as its capital.”

Abbas had held talks with interim President Adly Mansour and Defence Minister General Abdel Fatah Al-Sisi in Cairo last month, during a three day visit. He had also held talks with Mansour on 29 July, in his first trip to Egypt after the ouster of former President Mohamed Morsi on 3 July, making this the third meeting between the top officials since July.

Ahead of his visit to Cairo, Abbas met with Egyptian Ambassador to Palestine, Yasser Othman. The two had discussed negotiations as well as the humanitarian situation in the Gaza Strip.