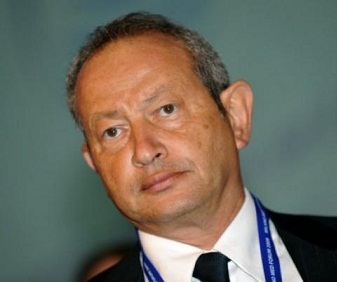 The Anti-Coup Alliance, also known as the National Coalition to Support Legitimacy, said in a Sunday evening statement that recent comments by businessman Naguib Sawiris aim at “igniting sectarian strife and increasing the societal division”.

Sawiris, a liberal billionaire and one of the founders of the Free Egyptians Party, said: “We would use violence if the Muslim Brotherhood begins with violence during the referendum [on the draft constitution on 14 and 15 January]”. His statement was video-recorded by the media after a press conference held by his party on Saturday to announce the merger with the Democratic Front Party.

Sawiris added that he was against the call for protests by liberal forces in response to the Brotherhood protests in order to avoid bloodshed.

Sawiris said that the Egyptian people are “sick” of the Brotherhood protests, adding: “We [the people] will move forward and nobody will stop us.”

“If the people who are [in power] right now do not take further steps in confronting the Brotherhood, we [liberal forces] will take to the streets [to confront them]; for now, we’re leaving the police and army in this confrontation alone,” he said.

The Anti-Coup Alliance statement read that Sawiris’ comments could not be interpreted separately from “the violence Egypt is witnessing since the 25 January Revolution, the violence which facilitated the way to the military coup that ousted Egypt’s legitimate and elected president; this is the counterrevolution which the military coup supported”.

The statement called for boycotts of “the coup’s businessmen” to continue, adding that “the coup is living its last chapter”.

Free Egyptians Party spokesman Ahmed Khairy said that accusations made by the Anti-Coup Alliance directed at Sawiris are “nonsense, and not worthy of a response”.

Khairy added that “if Sawiris had armed militias, they would have appeared during these past three years”.

The statement also attacked what the alliance described as “military’s judges” who “challenge the independence of judiciary and the rule of law”. The statement added that the judges are involved in “the putschists’ crimes and blasting the gains of 25 January Revolution”.

The alliance renewed their call for boycotting the referendum and called for a million man protest on Tuesday under the banner “down with the military’s judges”. They also called for the commemoration of the first anniversary of announcing the results of the “2012 true referendum on the legitimate constitution” on Wednesday, saying that they will assemble in front of courthouses and judges’ clubs nationwide.

Clashes between supporters of former president Mohamed Morsi and security forces on Friday left 37 injured and one dead, Bassem Mohsen, who sustained fatal injuries during the Friday clashes in Suez and later died at the New Qasr Al-Eini Teaching Hospital in Cairo on Sunday.