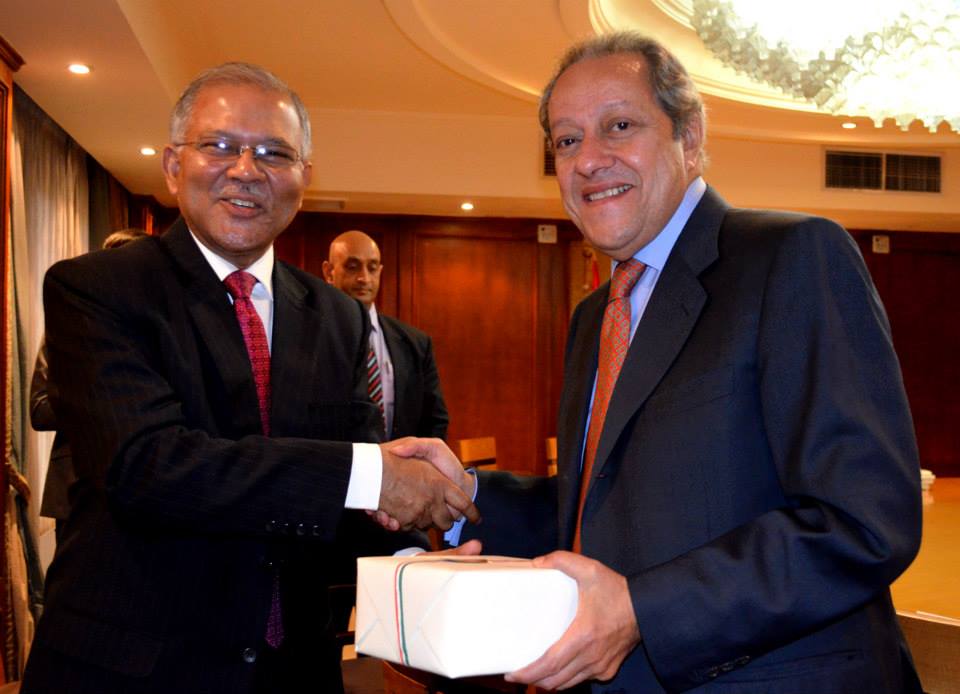 Minister of Foreign Trade and Industry Mounir Fakhry Abdel Nour, during his meeting with Ashok Kantha, Indian Vice Secretary for the foreign ministry for Middle East and North Africa, stated that Egypt aims to increase the volume of trade between the two counties to reach $8bn by 2016.

Abdel Nour pointed to the importance of increasing the cooperation especially in the fields of trade, investments and the development of Small and Medium Enterprises (SMEs). The minister added that it would be beneficial to gain from the Indian knowledge and expertise in the areas of information technology and chemicals.

The minister added that the Egyptian-Indian trade volume registered $2.3bn Q1 2013 compared to $5.5bn in 2012. A total of 50 Indian companies in the areas of textile, pharmaceuticals and information technology currently operate in Egypt.

During the meeting, Abdel Nour stated that the Egyptian government is keen on boosting bilateral ties between Egypt and India and supporting the Indian projects in Egypt.

In 2013, the bilateral treaties and agreements between Egypt and India include several memorandums of understanding (MOU) to cooperate in Information and Communication Technology and cyber security. The agreements also include two letters of intent to cooperate in the field of solar energy and launch the Egyptian nanosatellite.

The minister highlighted the role of the Egyptian-Indian Business Association, saying that it is essential to increasing the level of cooperation between the two countries. He added that members of the Egyptian team of representatives will be replaced.

With regards to his visit to Egypt, Kantha said: “India values its historic relationship with Egypt. My visit was an opportunity to build on this partnership with one of the most important countries in the region, and to actively work towards its expansion across different fields.

“Our trade and economic relationship has shown steady growth, and we are working towards resolving outstanding procedural issues at the earliest. We are confident that Egypt will be able to complete the roadmap to democracy at an early date. We know that the civilisational heritage of the Egyptian people will carry them through temporary difficulties.”

Kantha stated that the Indian government aims to join the list of countries that export wheat to Egypt, adding that all obstacles that have hindered the achievement of this end have been overcome.

Kantha invited Abdel Nour to attend the “Partnership Summit”, which will be held in India from 27 to 29 January.

Indian Ambassador to Egypt Navdeep Suri, who also attended the meeting, stressed on the necessity of implementing the agreement terms which have been reached between the two parties during the Joint Trade Committee meeting last March.

Earlier in November, Abdel Nour announced that Egypt and Saudi Arabia are set to develop a new roadmap for economic and trade relations during the coming period. Abdel Nour revealed the preparation of a “comprehensive exhibition”, which will be held in January to showcase Egyptian products in Jeddah and Riyadh.

“It includes agricultural and industrial products, and other sectors,” he said, noting that the exhibition will be held in coordination with the Egyptian-Saudi Business Council, Federation of Egyptian Chambers of Commerce (FEDCOC) and the Council for Saudi Chambers of Commerce and Industry.