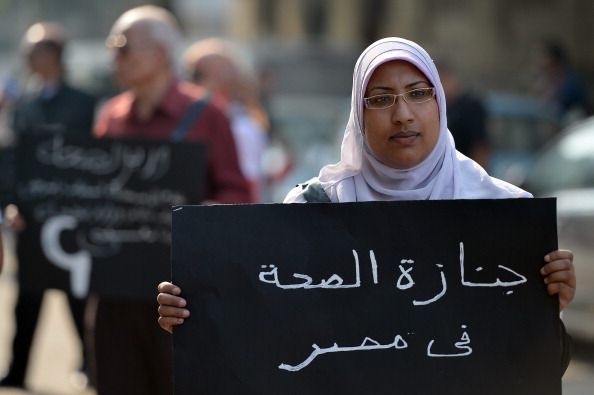 Minister of Health Maha Al-Rabat and Minister of Finance Ahmed Galal announced on Tuesday the completion of a final draft of a law that organises financial and administrative matters for healthcare professionals.

Doctors held negotiations with the two ministers earlier this week. Implementation of the law is set to begin in January and will be completed by July, 2016, state-run MENA reported. Around 464,000 doctors are set to benefit from the draft law.

Emtiaz Hassoona, the Rapporteur of the External Affairs Committee at the Doctor’s Syndicate said an emergency meeting is set to be held on Friday in which the committee that took part in the negotiations will present a detailed report on the talks.

Assistant Treasurer at the syndicate Mohamed Abdel Hamid said “we still have not seen the final draft,” adding that the draft would have to be presented to the doctors in a General Assembly before they decide on it. He added that it is unlikely that a general assembly would be held before 1 January, the date that a partial strike is planned by doctors.

On 8 January, a committee which has been formed to coordinate the strike is going to provide a report on the strike to the syndicate’s board.

In October, the Ministries of Health and Finance announced the finalisation of a new draft law, the Medical Incentives Law, which would increase the salaries of professionals employed in the public health sector. However, many doctors expressed dissatisfaction with it.

The Doctor’s Syndicate called on Monday for an “urgent” emergency meeting with Minister of Interior Mohamed Ibrahim to “address repeated assaults” on medical institutions and staff.

In 2012, doctors held a partial strike which lasted longer than 80 days. One of the three demands of the strike was to pass a law to enforce harsher penalties on anyone who commits an act of aggression against doctors or hospitals.

Throughout the past year, there have been several incidents in which doctors in public hospitals were forced to shut down their emergency rooms due to attacks, which prompted the syndicate to repeatedly call for more security. In May, Beni Suef General Hospital emergency department doctors started a strike after an attack.