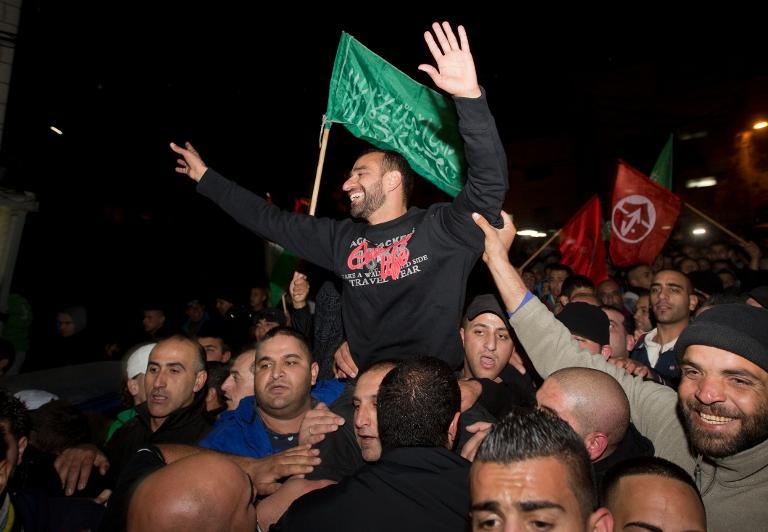 AFP – A Palestinian prisoner held in Israel since July 2012 who staged a life-threatening hunger strike was released from prison on Monday, an AFP journalist said.

Samer Issawi, whom authorities had accused of “terrorist” activities, ended his strike in April after he was taken to hospital in critical condition, in return for a promise he would be freed.

Under the terms of that deal, Issawi was due to be freed eight months from the end of his hunger strike and allowed to return to his home in Issawiya in Israeli-annexed east Jerusalem.

Thousands of Palestinians came out to celebrate his return to Issawiya, honking car horns and waving flags of different Palestinian groups, witnesses said.

Issawi was arrested in 2002 and sentenced to 26 years in prison for “terrorist activities.” He was freed in 2011 as part of a prisoner swap of around 1,000 Palestinians in exchange for Israeli soldier Gilad Shalit, captured by militants from the Gaza Strip.

But authorities re-arrested Issawi in July 2012, accusing him of travelling to the West Bank to set up “terrorist cells” and demanding that he finish his sentence.

Issawi said he had gone to the West Bank to have his car fixed, and refused offers to release him on condition he go to the Gaza Strip and then a European Union country.

The detention of Issawi, a member of the far-left Democratic Front for the Liberation of Palestine, made him an iconic figure for Palestinian prisoners in Israeli jails.

Israel holds more than 5,000 Palestinians in its prisons, most of them on security grounds. Around 150 of these are held under administrative detention, without charge or trial, and another 150 are minors.