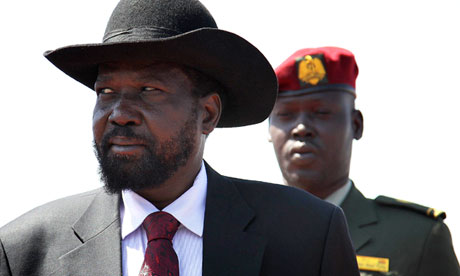 The high-level Egyptian delegation was sent to Juba, the nascent country’s capital, in an urgent mission “to reassure our South Sudanese brothers and to help them exit the current crisis”, according to a statement from the Ministry of Foreign Affairs.

Egypt will support all regional efforts aimed at reaching a quick solution to the current crisis and has full confidence that all parties want to contain the crisis before it escalates, Loza said.

The UN is currently strengthening presence in Africa’s newest country with troops and helicopters after fighting in South Sudan broke out on 15 December. The conflict started when President Kiir, who belongs to the larger Dinka ethnic group, accused former deputy president Riek Machar from the Lou Nuer ethnic group of attempting to stage a coup d’etat.

UN Secretary General Ban Ki-moon stated last week that people are being targeted because of their ethnicity, adding that the current situation is a “grave violation of human rights”. Ban called on the country’s leaders to settle the conflict peacefully.

Over 1,000 people are believed to have died in fighting but there is no exact figure as it stands.

The UN Mission in South Sudan has reported that fighting has left over 121,000 displaced, including 63,000 who have sought refuge in UN peacekeeping bases.

In response, the Egyptian delegation plans to deliver an aid shipment of food and medicine to the Sudanese government, described by Loza as “a small contribution to help overcome the emergency humanitarian crisis the people of South Sudan are going through”.

Deputy Minister Loza said that Egypt is ready to bring closer the views of all parties to the conflict through “fraternal relations” with all parties and diplomatic efforts.

“China will step up communication and coordination with all relevant parties to bring stability back to South Sudan at an early date,” Chunying said.

Foreign Minister Nabil Fahmy said last week that the stability and safety of South Sudan and its people and achieving national reconciliation will always be the main goal of any Egyptian efforts in the country.

Fahmy added that Egypt has consulted with the government of South Sudan and the UN to determine the size and quality of humanitarian aid needed.

Loza asserted the “strategic relationship” between Egypt and South Sudan as a rationale for the aid package, adding that Cairo is not far from ongoing developments in the landlocked country.