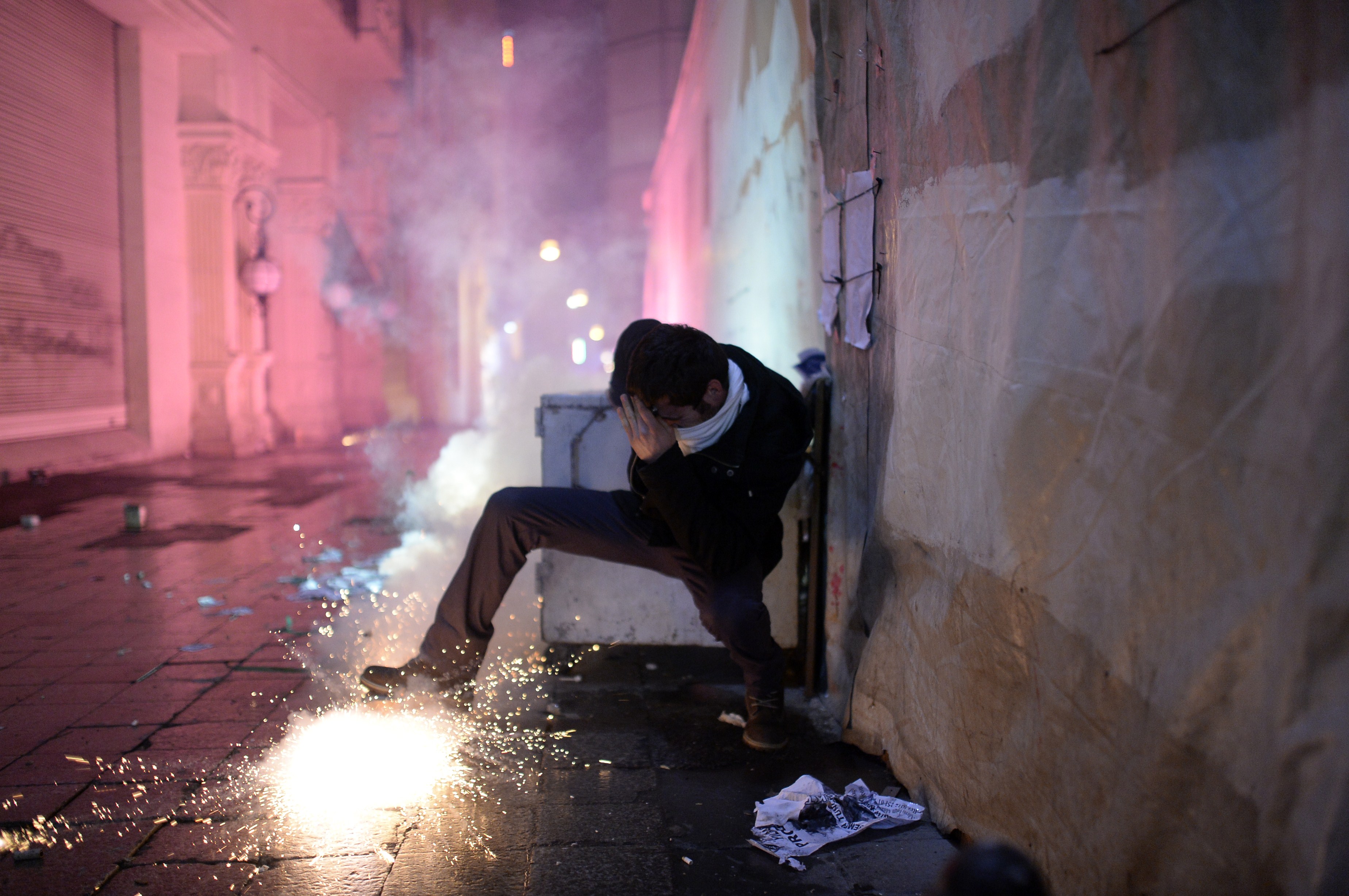 AFP- Turkish police broke up protests late Friday calling for Prime Minister Recep Tayyip Erdogan to resign over a corruption scandal that has savaged his government, prompted party resignations and pushed the country’s currency to a record low.

Police forcibly dispersed thousands of anti-government demonstrators in Ankara and Istanbul who had been calling for the government to step down.

In Istanbul, clashes took place, with some protesters shooting fireworks at police, who responded with water cannon, plastic bullets and tear gas. At least two demonstrators were hurt, an AFP photographer saw.

Hundreds of protesters who had gathered in a central square in Ankara were also made to leave by riot police.

During their rally, some had held up shoe boxes in reference to images of boxes stuffed with millions of dollars found in the home of one corruption probe suspect, the head of state-controlled bank Halkbank.

Despite the agitation, and days of political turmoil due to the corruption scandal, Erdogan has stood fast in claiming developments were a “smear campaign” mounted by obscure international forces.

“Those who call it a corruption inquiry are corrupt themselves,” he told a large crowd of his supporters on Friday as he arrived in Istanbul from a political rally in the northwest.

Erdogan also lashed out at lawmakers who have quit his ruling Justice and Development Party (AKP) because of the scandal, saying they have “betrayed us along our journey”.

Earlier Friday, another three lawmakers quit the AKP. One of them, former culture minister Ertugrul Gunay, said the party was being directed by “arrogance”.

The political fall-out was having economic repercussions, dealing a bad blow to the premier who has overseen a decade of growth.

Turkey’s lira weakened to 2.1492 against the dollar at Friday’s close, a record low after days of losses. The Istanbul stock market also dropped by 1.04 percent to 63,885.22 points.

“If this political earthquake with economic ramifications lasts a long time, serious problems might emerge in macro-economic indicators including growth, inflation and the current account deficit,” he said.

The major Turkish daily, Hurriyet, said the graft investigation had created a “bomb effect” in markets.

Erdogan has tried to contain the scandal, but to little avail.

On Wednesday, after his interior, economy and environment resigned — with the latter also calling for the premier to follow suit — Erdogan reshuffled nearly half his cabinet.

He has also fired dozens of police chiefs and decreed that investigating police now inform their superiors before launching probes demanded by public prosecutors.

One public prosecutor on Thursday said police and prosecution chiefs were blocking the expanding inquiry by refusing to carry out arrest warrants.

But Turkey’s top court on Friday blocked the government decree, which it said would cause “irrevocable damage”.

And the European Union urged Erdogan’s administration to address the corruption allegations in a “transparent and impartial manner”.

EU Enlargement Commissioner Stefan Fule said in a statement there was “growing concern” over the developments in Turkey, which hopes one day to join the European bloc.

Fule said the government directive “undermined the independence of the judiciary and its capacity to act” and welcomed the Turkish court ruling.

Pro-government Turkish media had suggested the corruption inquiry could be a setup to trigger a military coup.

But the armed forces, seen as guarantor of the country’s secular traditions, said in a statement Friday they “do not want to get involved in political debates”.

The backdrop to the crisis is a power struggle between Erdogan and former ally Fethullah Gulen, a US-based Turkish cleric who is hugely influential at home and whose followers hold key positions in the judiciary and the police.

“The cabinet reshuffle may contain the fire for now but it will not put it out,” wrote columnist Huseyin Gulerce in the Zaman daily affiliated with Gulen.

Erdogan is seen as increasingly struggling under the scandal, which has damaged his unstated hopes of running for president in 2014 elections.

But he has remained characteristically defiant.

Last weekend, when Erdogan charged that “some ambassadors are engaged in provocative actions” and “we don’t have to keep you in our country”, it was perceived as a veiled threat to US Ambassador Francis Ricciardone.

Pro-government newspapers have targeted Ricciardone directly, saying: “Get out of this country”.

The US State Department on Friday criticised the “baseless attacks” and said it had made its concerns known to Turkish authorities.

The Turkish media criticism of the US ambassador was “deeply disturbing,” it said.