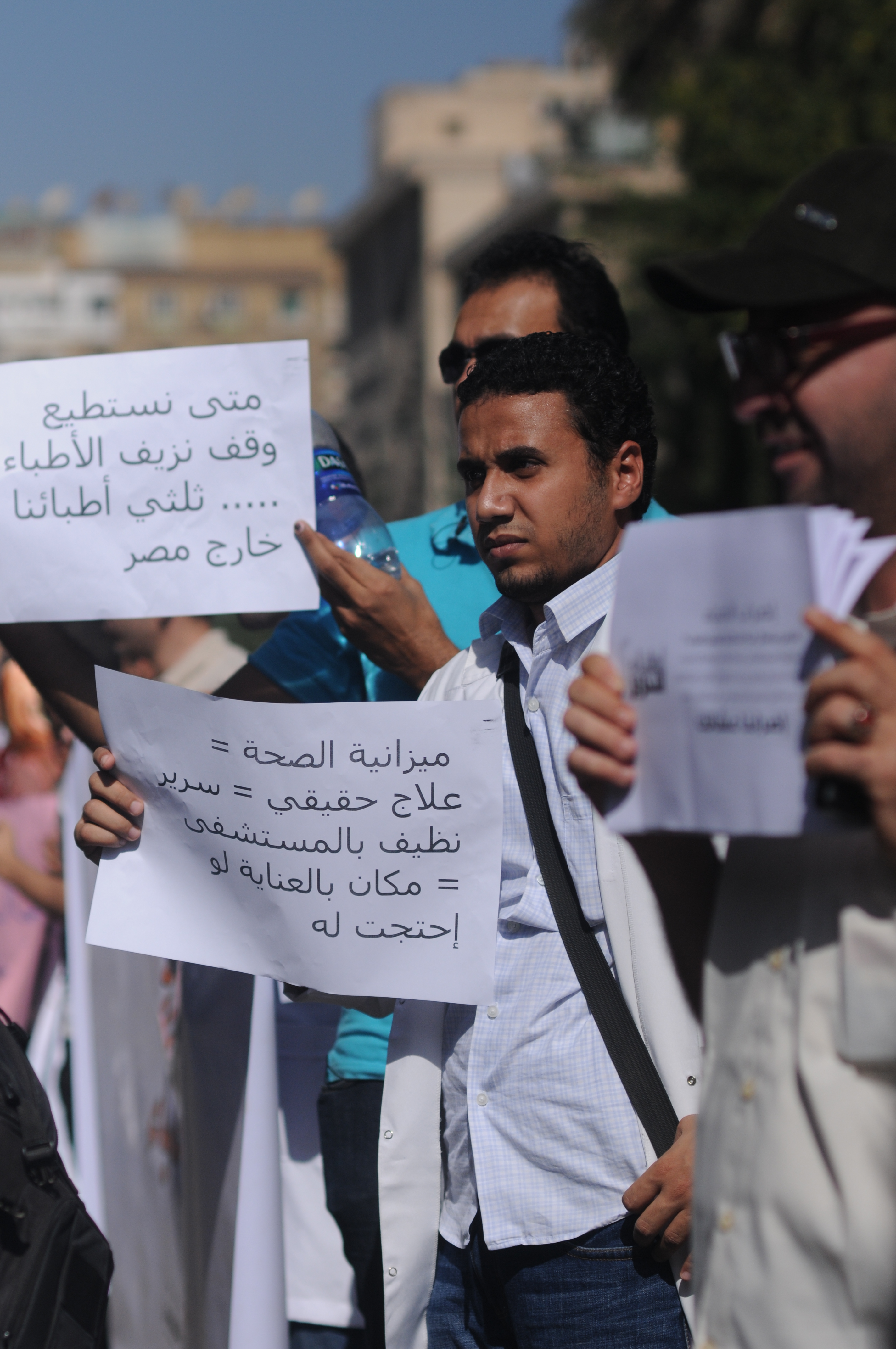 The doctors’ partial strike scheduled to begin on Wednesday is dedicated to Ahmed Abdel Latif, dubbed the “martyr of the profession”, the Doctors’ Syndicate said on Saturday.

Abdel Latif passed away earlier this month after contracting a fatal infection from a patient. His death sparked an outcry because he was receiving hazardous pay of only EGP 19 a month as compensation for working at a place where he could contract infections.

His death is the “result of a tattering health system which is unfair to doctors and patients alike,” the Doctors’ Syndicate said in a statement.

Doctors are holding a strike for one day on 1 January. On the same day, they are holding demonstrations to mourn the death of Abdel Latif and call for “quick reforms”. The syndicate said that using the demonstrations for political purposes is “prohibited” and that anyone who does will be held accountable.

Mahmoud Gawish, from the independent doctors’ movement Ultras White Coats, said the movement’s official stance is that it is against the planned “one day strike”. The movement calls on doctors to extend the strike, he said.

Doctors have been demanding higher pay, holding a strike which lasted for more than 80 days in 2012.

Currently, the doctors’ incomes are largely comprised of bonuses; however, doctors want to raise the fixed salary by passing the draft Staff Law.

Gawish said that of this income, only EGP 250 is fixed; the rest is from bonuses and incentives. The problem with incentives is that they are paid if there is money available, if not, they are paid the next month. “I know doctors who had to wait up to six months before receiving their incentives,” Gawish said.

The 2012 strike ended with the understanding that the draft Staff Law would soon be passed. The law would organise financial, technical and administrative matters like promotions and working hours for all professionals in the public healthcare sector, not just doctors. It was handed to the People’s Assembly in 2012 and a modified version was handed to the Shura Council in 2013; however, both legislatures were dissolved before passing the bill.

During the partial strike in 2012, several doctors who participated in the strike faced administrative intransigence, including threats of deductions on incentives and other hurdles like being investigated by administration for striking. The syndicate said on Saturday that it will provide protection for doctors who take part in the strike on Wednesday. The syndicate added that any hospital administrator who tries to use authority to threaten a doctor will be held accountable.

On 6 December, the doctors decided in a General Assembly emergency session to hold a partial strike on 1 January and voted to unanimously back the draft Staff Law, which doctors have been trying to pass for months.

Another draft law, the Medical Incentives Law, was suggested in October by the ministries of Health and Finance. The new law would raise incomes for doctors; however, 75% of the raise would come in the form of incentives and the total income would still fall short of the monthly EGP 3,000 proposed in the draft Staff Law.

Despite starting negotiations with the ministries of Health and Finance last week, the syndicate board said that the draft Medical Incentives Law, if implemented, will be a “quick pain killer”. The syndicate board added in a statement that it rejects that “the package of incentives” is considered an alternative to the draft Staff Law, stating that it is still holding on to draft Staff Law as the “real solution”.

The upcoming strike would follow the same protocol as the one doctors had followed last year while striking. The strike includes all hospitals and medical institutions that operate within the public healthcare sector.  It will apply to all non-emergency medical services and outpatient clinics. However, the emergency department, emergency operations, kidney dialysis, intensive care units and incubators will continue to run normally.

Gawish said Ultras White Doctors is also demanding an improvement in security conditions in hospitals, another one of the doctors’ demands during the 2012 strike. They demanded that a law be passed to enforce harsher penalties on anyone who commits an act of aggression against doctors or hospitals. Doctors called for an “urgent” meeting last week with Minister of Interior Mohamed Ibrahim to address assaults on medical staff.

Throughout the past year, there have been several incidents in which doctors in public hospitals were forced to shut down their emergency rooms due to attacks, which prompted the syndicate to repeatedly call for more security. In May, the doctors of the emergency department in the Beni Suef General Hospital began a strike after an attack.

Doctors Without Rights demanded that people who attack hospitals should be accused of attempted murder in order to insure a safe environment for doctors and patients.

The Doctors’ Syndicate said that the “success of the strike is our success in sending a strong message to society about the gravity of the current situation which is lethal to patients and doctors.” The syndicate said current conditions are repelling doctors outside the country.

Emtiaz Hassoona, the Rapporteur of the External Affairs Committee at the Doctor’s Syndicate, said that out of 250,000 doctors registered with the syndicate, only 90,000 work in Egypt   and only 60,000 of those work in the public health sector, while the rest work in private practices.

The doctors’ third and final demand during the 2012 partial strike was that the state budget for health be raised.