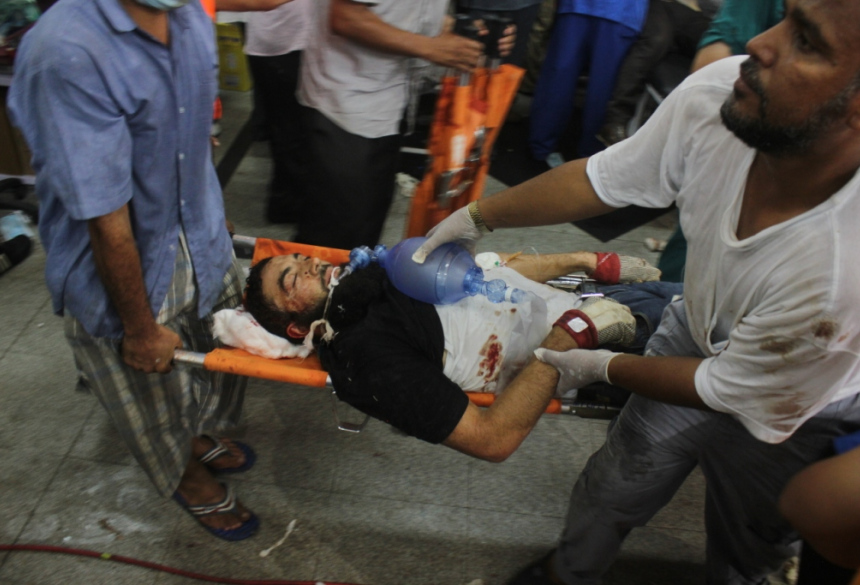 The largest death toll in a single day since the start of the 2011 uprising was registered in 2013. On 14 August, the military-backed government dispersed two large encampments set-up in support of ousted President Mohamed Morsi, killing at least 650 civilians in the process, according to official counts. It was dubbed by several human rights organisation as the “Rabaa Massacre,” in reference to the pro-Morsi encampment.

The Rabaa Al-Adaweya sit-in’s violent dispersal was both preceded and followed by grave human rights violations, making the year 2013 a “black year” for human rights, according to Lawyer Gamal Eid, who is the director of the Arab Network for Human Rights Information (ANHRI).

Eid noted that human rights conditions have been “deteriorating” throughout the year.

“Referring Morsi’s opponents to an investigation was a very frequent matter, though most of them were not detained in the process,” Eid said. “After Morsi’s ouster, different media outlets echoed a single voice, either out of fear or due to their hysterical support for the 30 June protests. Anyone who had a different opinion was either restricted or silenced altogether, such as political satirist Bassem Youssef.”

Youssef’s satirical show on private-owned satellite Channel CBC was cancelled in November after only airing the first episode of the third season.

Under Morsi’s tenure, Youssef was interrogated in March by former prosecutor general Talaat Abdallah. He faced charges of insulting Morsi and harbouring contempt for religion.

Eid said that Morsi and Abdallah, who was handpicked by Morsi and therefore seen to bear allegiance to him, opened the door to internal investigations at security camps as opposed to interrogating suspects inside courts. This phenomenon, Eid said, was expanded by the current regime.

Since Morsi’s ouster on 3 July, human rights conditions have taken a dangerous turn for the worse, Eid said.

“If the current military-installed regime’s only crime is the Rabaa massacre, the massacre alone is enough to place Egypt at the top of states that violate human rights,” Eid said.

At least 627 died during the Rabaa sit-in’s dispersal, according to the Forensics Authority, whereas independent figures indicate that 969 were killed during the dispersal.

The 2006 Lebanon war was a 34-day military conflict between the Lebanese Hezbollah militant group and the Israeli military. The war left at least 560 killed, according to Human Rights Watch.

Eid said that the current military-installed regime oversaw the killing of at least 1,300 civilians in six months, whereas Morsi’s one year in power saw 154 killed.

“Random arrests, and a series of laws that violate freedoms, including extending the period of preventive detention or issuing the Protest Law,” were exercises especially active in the second half of 2013.

Eid stated that the most problematic aspect of the second half of 2013 was the ambiguous nature of its ruling regime as it is neither entirely civilian nor explicitly military.

Eid believes that what happens with human rights standards depends on the outcome of presidential elections due next year.

“Either the change will be for the worse if the ruling regime is openly dominated by the military, or it will be slightly for the better if Egypt’s next president is outside the military’s grip,” Eid said.

*Disclaimer: All statistics were obtained from Wiki Thawra, a website dedicated to documenting the Egyptian revolution. Wiki Thawra was established by a group of independent youth. Its data mainly depends on reports by independent civil society organisations, including the Egyptian Centre for Economic and Social Rights (ECESR), the Hisham Mubarak Law Centre (HMLC) and the Front to Defend Egypt’s Protesters (FDEP).