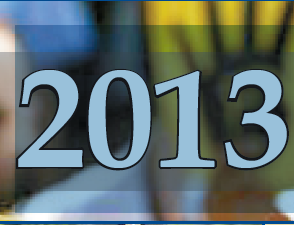 The year 2013 was a turbulent one for Egyptians.

It started with a cabinet reshuffle promising stability and reform, only for chaos to take over-three weeks later—the cities of Port Said, Ismalia and Suez were then stained by the sentencing of 21 people to death for killing 72 football fans. Former President Mohamed
Morsi called for a state of emergency in the three cities, which was not implemented by the Armed Forces. Moreover, the curfew Morsi ordered was widely defied, with nightly football matches between residents and soldiers.
This was the first indication that Morsi was no longer in power, whether for the people or the military.
Sectarian clashes marred the month of April with when Al-Khasous Church was attacked, leaving seven dead. The Tamarod (Rebellion) campaign suddenly emerged, calling for signatures to remove Morsi from power, met with the ridicule of the Islamists and but the support of people on the streets.
Another cabinet reshuffle was ordered in May, but Egyptians were beginning to get frustrated in light of waning security and
the increasing economic burdens. Tamarod began to gain momentum on the ground, announcing the collection of millions of verified
signatures using the national ID.
Islamists started to feel the heat of the grassroots campaign, with another cabinet reshuffle announced on 16 June to appease
the people. The shuffle was done in vain as on 30 June, massive demonstrations filled the squares in the different governorates calling
for the ousting of Morsi. Millions on the street were chanting one thing: “Down with the regime”, a déjà vu of 25 January 2011.
For three days, Egyptians remained on the streets, while Morsi remained defiant until the fateful day of 3 July when Defence Minister Abdel Fattah Al-Sisi announced the removal of Morsi and the formation of a new civilian government.
Jubilation was the most appropriate word to describe the sentiments on the street following Al-Sisi’s announcement, but would it last?
In response, angry Islamists formed a sit-in demanding Morsi’s “legitimate” return in Rabaa Al-Adweya and Al-Nahda square. Both lasted little over a month, and were violently dispersed leading to the death of over 600 protesters and 51 officers officially and 969 protesters as claimed by other sources. The situation in Egypt did not calm down with Hazem El-Beblawi’s government and continued to fail to meet the demands of the people concerning the declining security and economy. Bombings are now a weekly occurrence, prices are increasing and, to top it all, crackdowns on the freedom of speech and the right to assembly as pursuant under the Protest Law are almost reported on daily basis, which will only serve in creating a pseudo Mubarak-era state and will fail in providing the coveted security.
According to different polls, Egyptians are hopeful that the new regime will bring them the much desired stability with the anticipated referendum and parliamentary and presidential elections.
But the economic situation remains dire and hungry people make for angry protesters. Unless true reform is undertaken, cabinets will continue to be reshuffled and presidents ousted.

Top trials and verdicts of 2013

Escalating violence at Egypt’s universities in 2013