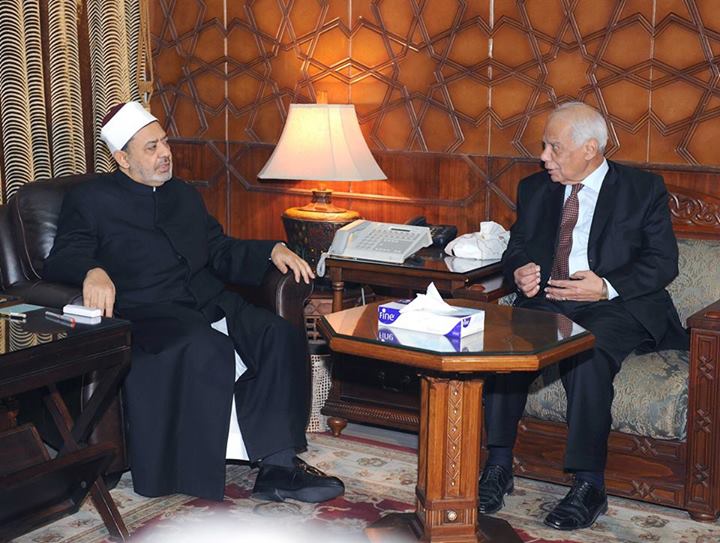 Grand Imam of Al-Azhar Sheikh Ahmed Al-Tayeb met on Wednesday with Prime Minster Hazem El-Beblawi and discussed the measures taken by Al-Azhar University to secure the examination process and the students’ safety.

The meeting was also attended by ministers of State for Youth and Religious Endowments, who discussed means for cooperation with Al-Azhar and preparations for launching a television channel for Al-Azhar, “which is a symbol for Islamic moderation”.

Al- Tayeb subsequently met with the board members of Egypt’s Student Union (ESU) headed by the ESU President Mohamed Badran. In the meeting Al-Tayeb discussed the role of the youth and ways they are expected to support Egypt at such critical time, calling on them to support the constitution.

Al-Tayeb added that the youth should take part in the municipalities, as this would be “good preparation for them in the field of politics”.

“The amount of violence that is used by security forces against the students is the best proof that boycotting of examinations is a success,” said Ahmed Ghoniem, spokesman of Students Against the Coup (SAC).

At Cairo University, SAC protested against the decisions of the Supreme Council of Universities (SCU), issued on 26 December, allowing armed security personnel on campus to secure the examination process.

Ghoniem said that the protest began with prayer for Abdel Rahman Hassan Wahba, also known as Boda, who died on 30 December in the hospital from a severe birdshot injury.

According to Ghoneim, the demonstration proceeded to head into the university and protest inside the hall of the SCU building, where students were attacked by the administrative security and SCU employees. He added that fire extinguishers were used against the protesting students who were physically assaulted, leading to several injuries, including one inflicted by a blade.

The protest regrouped outside the SCU building before heading to Nahda, Giza Security Directorate then to the Faculty of Computer Science and finally inside the university in front of the SCU building.

At Zagazig University, security forces stormed the university campus to disperse a protest organised by SAC.

Salma Samy, Correspondent of the Student Observatory of the Association of Freedom of Thought and Expression in Zagazig, said: “Security forces arrested any student with a beard. The students had to squeeze out of the gate of the Faculty of Medicine to avoid getting arrested from the security forces at the Faculty of Arts entrance.”