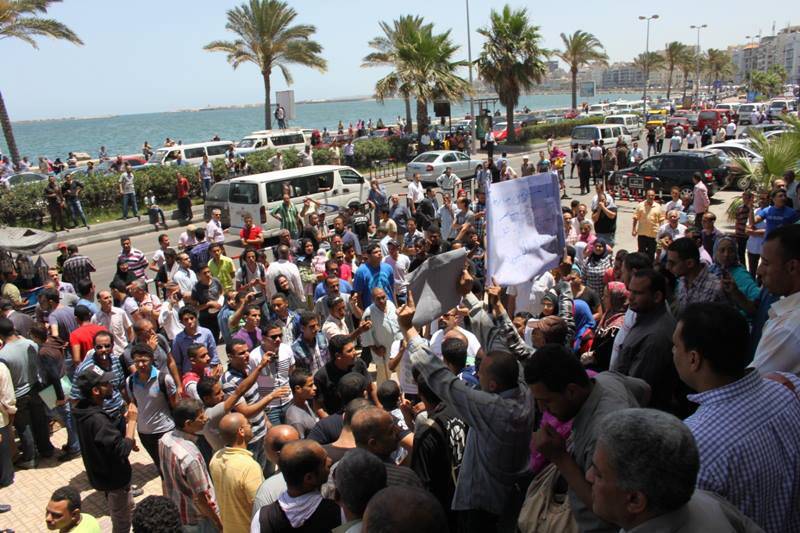 The Raml Misdemeanour Court sentenced on Thursday nine Alexandrians for two years in prison and an EGP 50,000 fine for violating the newly-issued and highly controversial Protest Law.

The nine include prominent Alexandrian political activists Mahienour El-Massry and Hassan Mustafa, both sentenced in abstentia alongside three others.

All of the sentenced are accused of taking part in a protest organised in solidarity with torture victim Khaled Said outside the Alexandria Criminal Court on 2 December. The protest was scheduled to take place during the trial of two former police officers charged with torturing and killing Said.

Six charges were pressed against them: protesting without a prior notice, assembly, assaulting security personnel, vandilising public property, and possession of unlicensed weapons. Hamdy Khalaf, an Alexandrian lawyer defending the sentenced, said they were sentenced under Article 31 of the Penal Code, which stipulates that “if several crimes are committed for the same purpose and are interconnected they shall be considered one crime and the ruling passed shall be prescribed for the most serious of these crimes”.

Khalaf said that the activists were therefore punished under Article 19 of the Protest Law. The article states that protesters who stall traffic, prevent citizens from tending to their affairs or endanger lives or properties are to be punished by two to five years imprisonment and can be fined between an amount EGP 50,000 to 100,000.

Khalaf denied that any of the nine sentenced on Thursday had organised the protest in question. He said that Islam Hassanein, one of four currently in custody, was returning home from an exam at the time of his arrest while another, Nasser Abu Al-Hamd, was sitting in a café when he was arrested.

“The defence team told the court on Thursday that our defendants were randomly arrested,” Khalaf said. He added that they will appeal the verdict, hoping that the appeal session will be scheduled soon.

State-run news agency MENA had reported that the “protesters were obstructing traffic and clashing with residents of the area which prompted security forces to intervene and restore order”.

According to a statement released by the Alexandria police directorate, “two people who are accused of damaging two police vehicles and injuring the driver were arrested”.

“Even if you throw us all in jail, the revolution will go on,” she said. “The Protest Law shall be gone alongside the current regime. Only the people will prevail, and in time they will know who the real enemy is.”

El-Massry is a lawyer who was present outside of the court on 2 December due to the nature of her profession, Khalaf said.

Mustafa gained notable prominence after he helped shed light on the murder of Said in 2010. His sentence comes after a series of trials, verdicts and acquittals.

Also sentenced under the Protest Law, the trio was found guilty of protesting without the Ministry of Interior’s approval, rioting, “thuggery”, using violence against Abdeen Courthouse security personnel, and possession of melee weapons