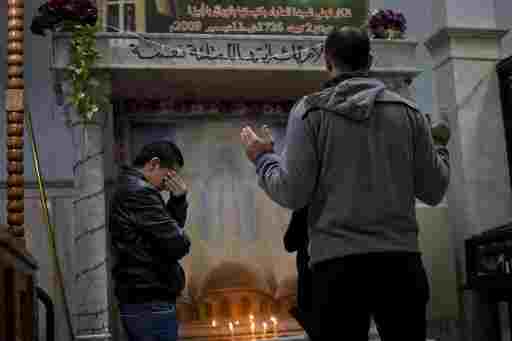 AFP — Egypt’s Christians rang in the new year Wednesday with prayers for peace after months of unrest, but expressed no regrets over backing the military’s overthrow of Islamist president Mohamed Morsi.

Coptic Christians, who make up about 10 percent of Egypt’s 86 million people and constitute the largest Christian community in the Middle East, have long complained of official discrimination and feared attacks by radical Islamists.

After security forces violently dispersed two pro-Morsi sit-ins in Cairo in August, setting off clashes in which hundreds of demonstrators were killed, Islamist mobs unleashed their fury on Copts, setting fire to homes, shops and churches, mainly in central Egypt.

But Copts interviewed this week stood by their decision to support the massive protests demanding the ouster of Morsi, who many Christians feared was trying to transform Egypt into an Islamic state.

“I don’t regret supporting the military against Morsi, whatever the price I have to pay,” Ibrahim George, 37, told AFP at his cramped apartment on the outskirts of Cairo.

Four members of his family, including his mother, were gunned down on October 20 outside the Church of the Virgin in Cairo’s working class neighbourhood of Al-Warrak as they stepped out of a wedding party.

The victims also included two young daughters of his cousins.

“I received a call that the church was attacked. I first thought someone was kidding,” he said, choking up as he described the aftermath of the night-time shooting.

“When I rushed there, I saw a massacre and my mother covered in a blanket soaked with blood. I was devastated,” he said.

Despite the tragedy, the Al-Warrak church on Tuesday was a scene of joy.

Boys and girls, dressed in colourful clothes and wearing red Santa Claus hats, ran merrily in the church’s compound, while volunteers distributed sweets and cakes to worshippers as they marked the New Year.

A brightly lit Christmas tree added to the celebratory mood, while several Egyptian flags hung from the inside walls of the church’s courtyard.

The attack on Al-Warrak church was one of several targeting Christians as enraged Islamists blamed the community over the overthrow of Morsi, Egypt’s first democratically elected leader, after just one year in office.

Morsi’s ouster left Egypt bitterly divided, with more than 1,000 people killed in street clashes and other violence and thousands more arrested in a massive crackdown on Islamists by the military-installed government.

The perception that Copts were behind Morsi’s July 3 overthrow was fuelled by the appearance of Coptic Orthodox Pope Tawadros II along with Muslim leaders and other politicians on television when army chief General Abdel Fattah al-Sisi announced the decision.

“The church did not bar Copts from participating in the June 30 protests against Morsi,” said priest Daoud Ibrahim of the Al-Warrak church, referring to the massive demonstrations in Cairo demanding his resignation.

“We are now paying the price of this decision…. but we don’t regret it. We are not scared. The doors of my church are open to all,” said the priest, stroking his long white beard as worshippers greeted him, while nearly a dozen policemen guarded the building.

Authorities have blamed much of the violence targeting Copts on the Muslim Brotherhood, charges denied by the Islamist movement.

The Copts have complained of persecution and systematic discrimination for decades, including during the 30-year rule of Hosni Mubarak, who was toppled by an Arab Spring-inspired uprising in 2011.

After a New Year’s Eve mass three years ago, when Egypt was still ruled by Mubarak, more than 20 people were killed in a suicide bombing as worshippers left the Al-Qidissin (The Saints) Church in the Mediterranean city of Alexandria.

Emad Gad, a Copt and an analyst with Al-Ahram Centre for Political and Strategic Studies, said that despite the retaliation Copts were determined to back the new constitution drafted under the military-installed authorities.

“The Copts are satisfied with the new constitution as it has removed hardline interpretations of the Islamic sharia law that were present in the previous one,” he said.

The 2012 charter, suspended when Morsi was ousted, was written by a panel dominated by Islamists.