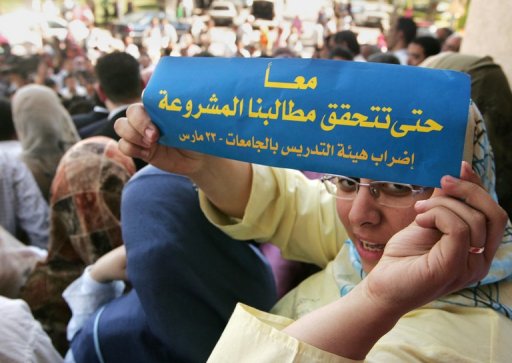 The Ministry of Finance has published a report stating that 4.83 million workers will benefit from the new minimum wage, including about 1.55 million teachers and 46,400 medical personnel.

The implementation of minimum wages for all other employees will cost a total of EGP 10bn per year, in addition to a further EGP 6.20 and 1.77bn per year for public sector teachers and employees at Al-Azhar University respectively, according to the report.

So far, the minimum wage only applies to the public sector, with no agreement yet with the private sector. Public workers comprise less than a quarter of the work force, according to state-owned Al Ahram newspaper.

Raises as opposed to higher wages

Several positions with salaries higher than EGP 1,200 a month also received raises, indicating that the plan entailed increasing bonuses or incentives rather than increasing the wage itself.

The Ministry of Health had previously announced that it would apply a new law that would increase the income of about 464,000 Egyptian health workers. The law did not increase the actual wage, but rather provided for a variety of incentives, risk allowances, and reimbursements.

Rapporteur of the Media Committee of the Doctors’ Syndicate Dr. Hossam Kamal stated that these developments do not satisfy the doctors’ demands: “The changes do not raise the actual minimum wage, but rather change the bonus and incentive structure which is subject to change and deduction based on the hospital’s evaluations, which do not even have clear criteria.”

Teachers working in the public sector are having the same problem and the Ministry of Finance had previously announced that they  will also obtain “financial advantages,” or a salary which is higher than the minimum wage.

Finance minister Ahmed Galal announced that the minimum wage will cause Egypt’s budget deficit to increase to 10% during the current fiscal year from 9.1%.

He had also announced in December that the funding for the minimum wage would come from savings and foreign aid from several Gulf countries, which have pledged $12bn after Morsi’s ouster. The EGP 18-20bn needed for the minimum wage is part of a larger EGP 30bn stimulus package that was announced to take place in January.

Interim Prime Minister Hazem El-Beblawi announced Sunday that the maximum wage of EGP 42,000 would be implemented on all employees of the administrative body of the state and general authorities, in addition to local governmental servants.