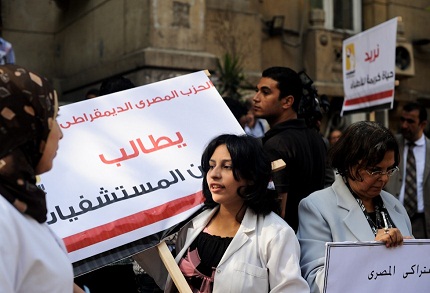 The Medical Professionals Union has decided in a General Assembly to hold partial strikes on 19 and 20 January, and an open-ended strike starting February.

The General Assembly demanded that the draft Staff Law be passed, a bill that organises financial, technical and administrative matters like training, promotions and working hours for all professionals in the public healthcare sector.

The union includes representatives of doctors, dentists, veterinarians, pharmacists and the nursing staff; however, Rapporteur of the Media Committee of the Doctors’ Syndicate Hossam Kamal said that the union’s decision is not binding to the syndicates represented within.

He said that the Doctors’ Syndicate will hold a meeting to coordinate internally and with the syndicates of other medical professionals to decide methods of escalating strikes.

Kamal said the doctors may choose to follow the decision of the Medical Professionals Union General Assembly.

He asserted that strikes will escalate and three of the options are: an “administrative strike”, in which doctors would refuse to issue marriage and death certificates, an open-ended strike, rather than a one-day strike, and collecting a group resignation, which would be handed in at once when the number of resignations collected reaches a “critical number, such as 20,000”.

Doctors have held partial strikes on 1 and 8 January, demanding that the bill is passed and other reforms made, after negotiations in December between representatives of the syndicate and the ministries of Health and Finance failed to resolve the long standing issues.

On 31 December, the cabinet approved a law that would raise salaries for all medical professionals; however, doctors were not pleased since the raise would increase incentives rather than the fixed salary.

A bulk of doctors’ salaries is made up of incentives. However, doctors demand that pay raises increase their fixed salary, which is what the draft Staff Law would achieve if passed.

In 2012, doctors staged a partial strike which lasted longer than 80 days and ended with the stipulation that the bill would soon be passed. Subsequently, the bill was handed to the Shura Council in 2013 but the legislature did not survive to pass it.

Like the previous strikes, the upcoming one is set to include all hospitals and medical institutions that operate within the public healthcare sector.

The General Assembly was attended by 350 members of the union. It was scheduled to be held on 19 December but was postponed due to a lack of quorum.