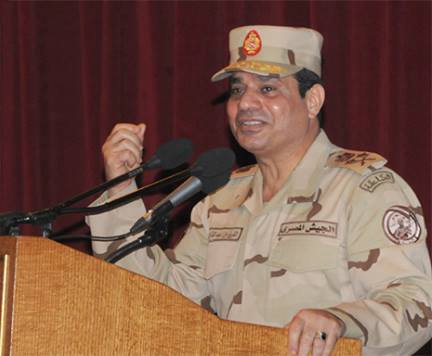 Commander-in-Chief of the Armed Forces Abdel Fattah Al-Sisi stressed on Saturday he would do whatever Egyptians demand, in response to questions over a potential candidacy for president.

“I will never turn my back to Egypt,” state-run news agency MENA quoted Egypt’s defence minister as saying. Al-Sisi spoke during a symposium organised by the armed forces moral affairs department.

During the symposium, armed forces leaders announced they would “succumb to the peoples’ demands if they want Al-Sisi to run for president,” MENA reported.

Al-Sisi, who has gained sweeping popularity following former President Mohamed Morsi’s ouster, is yet to officially announce whether he will run for the upcoming presidential elections. Several political movements have repeatedly called on him to run.

State-run Al-Ahram quoted Al-Sisi as saying that he would run for president if “the people demand it and the army delegates” him.

Armed forces spokesman Ahmed Ali could not be reached for comment. He nevertheless said in an official statement on Saturday afternoon that Al-Sisi called on Egyptians to “bear the national responsibility” and participate in the coming constitutional referendum, due to be held next Tuesday and Wednesday.

Amr Moussa, chairman of the 50-member Constituent Assembly which drafted the new constitution, attended the symposium, stressing that the new draft “protects the nation’s will and preserves freedoms”.