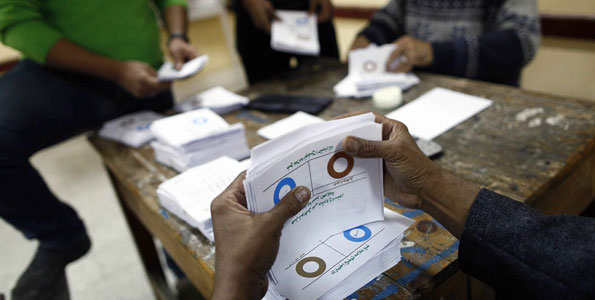 As the interim government prepares for the referendum on the draft constitution, due to be held domestically next Tuesday and Wednesday, political movements remain divided regarding their stances.

Religious leaders of all affiliations have called on Egyptians to participate in the upcoming national referendum on the recently drafted constitution.

The State Information Service released a statement on 24 December, which said Grand Imam of Al-Azhar Ahmed Al-Tayeb believes the “referendum on the constitution will take Egypt to a new stage of building, work, security and stability,” adding that the referendum “serves the interests of the homeland and the goals of the Islamic law”.

Pope Tawadros II has also voiced his support of the constitution on Christmas Eve in a joint meeting with other Christian officials. The pope said that participation is a “duty” and a “must”.

Egypt’s Grand Mufti Shawky Allam called on Egyptians to disregard “attempts to taint the [draft] constitution” and urged them to participate in the upcoming constitutional referendum. In a conference held two weeks ago to recap Dar Al-Ifta’s year-in-review, Allam denied that the draft constitution contradicts the Islamic Sharia.

Similar to its stance on the 2012 constitutional referendum, the Salafi Al-Nour Party has announced its strong support for the draft, urging Egyptians to vote Yes in the January poll. Party leaders have been holding nationwide conferences highlighting the positive aspects of the draft constitution.

Founding members of the Tamarod (Rebellion) campaign, which was the first to call for former president Mohamed Morsi’s ouster, is also holding similar pro-constitution conferences nationwide. The campaign, which was represented by two members in the 50-member Constituent Assembly that drafted the constitution, is an adamant supporter of the draft constitution.

Other parties and movements, including the Egyptian Social Democratic Party, the Free Egyptians Party, and Al-Tayar Al-Sh’aaby (Popular Current) have also voiced support for the drafted amendments.

Al-Dostour Party called on Egyptians to “strongly participate” in the upcoming constitutional referendum, but maintained neutrality concerning its position on the amendments put forth by the Constituent Assembly.

Al-Dostour Party also expressed its rejection of boycotting campaigns against the referendum due to the “critical conditions experienced in the country and the fierce attacks by forces opposed to the corrective revolutionary wave of 30 June.” The party added that widespread participation in the referendum would attest to the “strengthening of the roadmap”.

The Muslim Brotherhood’s Freedom and Justice Party and Al-Jamaa Al-Islamiya both announced they would boycott the referendum.

The Anti-Coup Alliance, comprised of a group of Islamist and political movements that support Morsi’s “legitimacy”, announced in December their boycott of the referendum on the draft constitution.

The alliance criticised the media campaign that is “manipulating the masses to vote Yes”, the interim government’s ambiguity over the consequences of voting No, and the potential for fraud during the vote because “the military and police forces are not objective, as they are part of the coup.”

The 6 April Movement (Democratic Front) also announced they will boycott the referendum during a press conference held last Wednesday. The youth movement said the decision is based on an internal vote and has denied any affiliation with the Anti-Coup Alliance.

Misr Al-Qawia (Strong Egypt), former presidential candidate Abdel Moneim Aboul Fotouh’s party, urged voters to oppose the draft at the polls, criticising the autonomy of the military and the powers of the executive branch granted by the draft.

Three party members were arrested last Tuesday while hanging “No to the Constitution” posters in Garden City, Cairo. The party’s spokesman Ahmed Imam said the arrested party members are charged with the possession of anti-constitution posters.

The 6 April Youth Movement is also campaigning for a No vote. The movement’s founder Ahmed Maher and leading figure Mohamed Adel have both been sentenced to three years in prison for violating the newly-issued and highly controversial Protest Law.

Armed forces spokesman Colonel Ahmed Ali announced on Friday that over 160,000 army officers and conscripts will secure the constitutional referendum, in collaboration with the Ministry of Interior and the Supreme Electoral Committee.