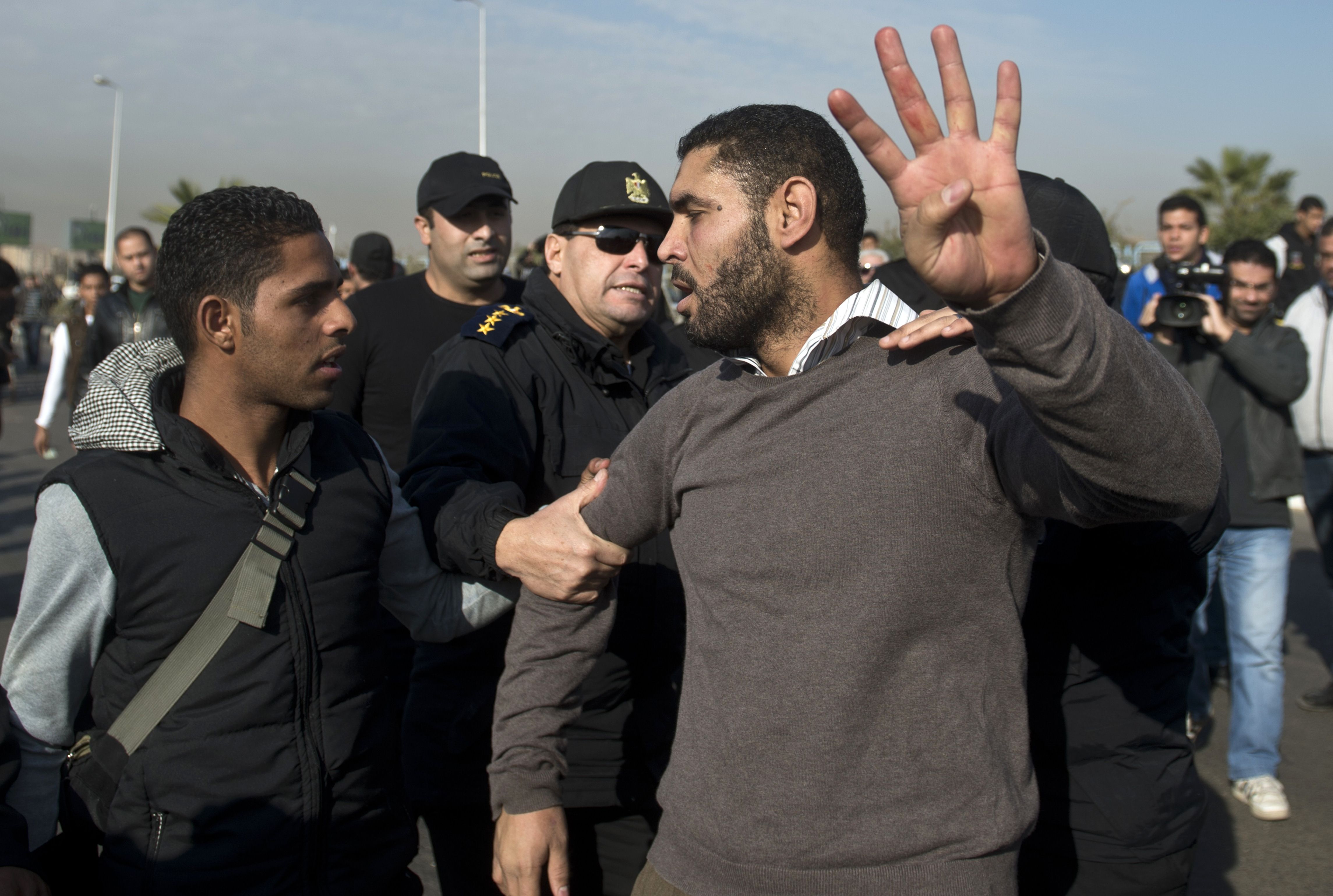 At least 21,317 have been arrested nationwide since the ouster of former President Mohamed Morsi on 3 July, according to Wiki Thawra, a website dedicated to documenting the Egyptian revolution.

Arrests have taken place on an almost daily basis as Morsi supporters continue to protest his ouster.

Wiki Thawra documented the arrest of 2,590 leading figures and members of the Muslim Brotherhood, the result of the military-installed government’s intensified crackdown on the organisation. Interim Prime Minister Hazem El-Beblawi’s cabinet listed the Brotherhood as a terrorist organistation on 25 December.

On Sunday, the Qasr Al-Nil Misdemeanour Court extended the temporary detention of 11 protesters arrested last Wednesday during which they staged a protest in solidarity with other detainees.

The 11 protesters are accused of assembly, protesting without a permit, assaulting public employees, stalling traffic and displaying force, according to a statement released by the Association for Freedom of Thought and Expression. Their detention has subsequently been renewed for 15 more days.

The 11 detainees were holding a protest in Talaat Harb Square in downtown Cairo last Wednesday. The protest called for the release of a group of detainees, including Ayat Hamada, a female freshman at Al-Azhar University who was arrested during clashes outside the university campus on 28 December.

On Saturday, Nasr City prosecutors extended the detention of 174 Al-Azhar University students held due to their association to on-campus violence which occurred on 28, 29 and 30 December 2013, the start of the semester’s final exams. The students, who include 23 females, were detained for 15 days; they are accused of inciting riot.

Out of the 21,317 detained during the past six months, 16,387 were arrested during political incidents, 1431 for violating the curfew, 89 for or related to terrorist acts and 80 relating to sectarian violence. At least 740 of those arrested were referred to military prosecution, according to Wiki Thawra.

Interim President Adly Mansour issued in November a new Protest Law drafted by the Ministry of Justice and approved by the cabinet to regulate the right to peaceful assembly. The highly criticised law requires a notice for any planned assemblies at least three-working days in advance and enforces harsh punishments for protesting without such notice.

6 April Youth Movement founder Ahmed Maher and leading figure Mohamed Adel have both been sentenced to three years in prison for violating the Protest Law, alongside political activist Ahmed Douma.

A 30-page long report prepared last week by 14 domestic human rights organisations, entitled ‘Arms of Injustice’, failed to provide an accurate count of all those arrested since Morsi’s ouster, “since arresting hundreds per day has become a norm”. The report nevertheless cited independent reports issued by signatory organisations which stated that at least 510 students were arrested from 3 July to November, 27 journalists were arrested between 26 July and 26 August, and 184 women were arrested since the forcible dispersal of the pro-Morsi Rabaa Al-Adaweya and Al-Nahda sit-ins on 14 August.

Wiki Thawra was established by a group of independent youth. Its data mainly depends on reports by independent civil society organisations, including the Egyptian Centre for Economic and Social Rights (ECESR), the Hisham Mubarak Law Centre (HMLC) and the Front to Defend Egypt’s Protesters (FDEP).