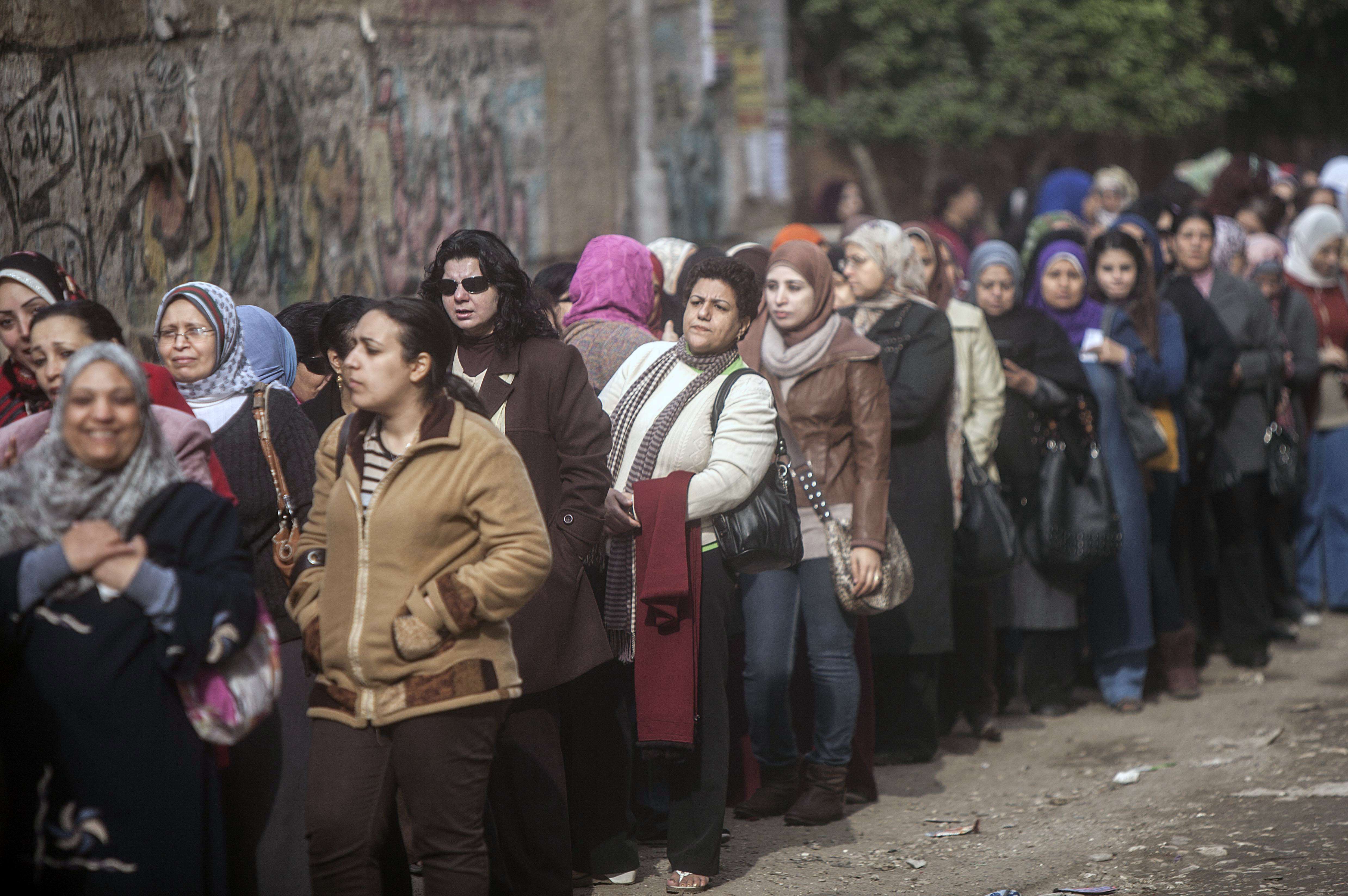 Thousands of Egyptians formed queues at polling stations nationwide on Tuesday, in the first of two days to vote for or against the country’s recently amended constitution. Following the ouster of former President Mohamed Morsi by the military on 3 July, a 50 member Constituent Assembly was tasked with revisiting and revising the suspended 2012 constitution, a job they completed on 3 December.

In the heart of downtown Cairo, over a hundred voters lined up outside Abdeen Secondary School in early in the morning as police and military secured the polling station.

“This constitution will bring good to Egypt,” said Medhat Kamel, an engineer who said he had arrived early to the polling station to vote before work. “This constitution will allow the Egyptian people to possess the power and authority in their own hands,” he added. “Everyone has a national duty to participate in the referendum.”

In Cairo’s Manial suburb, the referendum went “very smoothly and people were being treated very well,” one employee who voted Yes said after casting his vote.

Everyone was helping each other inside despite the crowds, one supervisor said.

An elderly housewife who said she read the constitution explained that she voted Yes for the sake of stability. She added that people who voted No or opted for boycotting “do not want stability for the country.”

Another voter, Nisrine Mohamed, said, “boycotting is being passive. If you do not approve of the constitution, vote No.”

But Hesham Mohamed, a retired policeman who is boycotting, said he saw few differences from the 2012 constitution. “They just changed the numbers of some articles… very small changes but it is all void,” he said. He added that boycotting is not being passive but rather “a political stance.”

One woman who participated in the 30 June protests which led to the toppling of ousted president Mohamed Morsi said she read parts of the constitution and voted Yes. By voting Yes, she said, “I am continuing what I started on 30 June.”

“I believe in the constitution because I trust the people who put it forth and I know that there is hope for change,” she said. “Before, there was no hope.”

Two women who voted Yes said they read the constitution more than once. “There are loopholes, but they are insignificant,” they added. “There are so many privileges in it for women and farmers and in the field of education and health.”

Outside the polling station, pro-army songs were ringing and papers were being handed out to voters, calling for Defence Minister Abdel Fattah Al-Sisi to run for president.

The day was not without incident, however, and began with an explosion in Imbaba, in the north of Giza.  The blast produced no casualties, however, and polling stations at of Martyr Gawad Hosny and Industrial Secondary School witnessed a good turnout, with queues hitting their peak before noon.

Daily News Egypt spoke with a number of voters in the area, all of which saying they had voted Yes.

Judge Yasmine Nasser, heading the referendum in Kassem Amin Secondary School for Girls said, “the people are happy to vote” but believed it was too soon to make any judgment about the turnout.

A small fight broke out outside Kassem Amin School between local residents following political argument. Essam Hazzaz, 29, was standing in front of the polling station making the Rabaa sign, which provoked one of the residents, who described him as a “traitor”. The fight soon ended with no injuries.

Hazzaz explained that he was boycotting the constitution not because of the Muslim Brotherhood, but because he rejects what he calls “military rule”.

While confrontations such as these were minimal, security at polling stations was tight, as in Zamalek, soldiers and policemen were stationed outside Zamalek Al-Qawmeya Al-Moshtaraka school, conducting security checks upon entrance to the courtyard of the school. Volunteers in high visibility jackets helped to organise the queue and direct voters to the correct areas once inside the polling station.

Journalists with passes to enter polling stations were granted access by security forces.  Daily News Egypt witnessed one soldier reviewing video footage of one credential bearing cameraman outside the school.

In a queue of dozens of women outside Abu Bakr Al-Seddiq School in Dokki, Giza, 75-year old Mahri Al-Nemsh said she had come to the polls “not for my own good, but for the country’s.”

Al-Nemsh said she voted Yes because “this is what should happen for the country to rise up.” She said she read “most” of the constitutional articles she voted on, adding the draft constitution “serves the people’s best interest”.

Magda Metwally said her approval of the draft constitution stems from her relief due to “relieving the country of the Muslim Brotherhood”, describing the group as “traitors”. She had voted against the 2012 constitution, she said, because it glorified the president.

Another female voter, Amaal Farouk, voted Yes on the draft constitution “to achieve stability.” She added that the new draft “minimised presidential powers after the 2012 constitution had expanded them to create a dictator for a president.”

Farouk only read some articles of the constitution; she admired the rights the draft preserves for citizens, including the right to healthcare.

Metwally did not read the draft constitution; she followed some of its article through television coverage.

“What I like the most about this draft constitution is that it cancels the labourers and farmers quota,” Metwally said. The Constituent Assembly which drafted the constitution had scrapped an article present since the 1960s mandating that 50% of parliamentary seats be reserved for farmers and labourers. “This quota was badly exploited.”

Metwally, who works at the National Research Centre, hoped that the constitutional articles positively addressing research would be implemented.

Rozeen Hakem believed that her Yes vote would pave the way to bring “a ruler who deserves Egypt” and achieves security. “I don’t think anyone was happy with [former President Mohamed Morsi’s] rule,” Hakem said. “It was mired with lies and destruction … the Muslim Brotherhood wanted to prevail alone.”

Hakem, who didn’t read the draft constitution in its entirety, applauded the draft for preserving the rights of minorities, including; women, farmers, and Copts. She said she looked forward to electing a president after the constitution passes.

“If not [Defence Minister Abdel Fattah] Al-Sisi, then the next president should be someone of an equal value,” Hakem said.

The northeastern Cairo district saw a relatively high female turnout in the early hours of voting, with queues forming an hour before polls opened at 9am.

In an interview with men outside Salah Al-Din polling station in Heliopolis, the majority disclosed that they would vote Yes. “There is nothing wrong with this constitution,” said an elderly man. “I can’t see a reason why somebody would vote No.”

Women outside Tabbary Al-Hegaz polling station in Heliopolis said they would vote “Yes”, hoping for “stability”.

While the vote appeared to go off smoothly, a number of violations were reported nationwide. Among the violations cited were: attempting to influence voters’ decisions in both directions; preventing voters from accessing polling stations; preventing observers from carrying out their duties; the absence of voting ink, voters being transported to their polling stations in groups; some voters’ names missing from ledgers; and some polling stations inactive before 11am. For more details, see our full coverage of violations titled “Violations reported during first day of Egypt’s referendum”