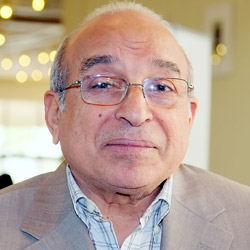 Al-Sinawy begins his article by explaining that Adly Mansour did not expect his current position as interim president. “He had not even officially accepted his position as head of the constitutional court when he was assigned [to be] the new president for Egypt, according to the 3 July statement that removed former president Mohamed Morsi [from power].”

Al-Sinawy believes that the idea of assigning the head of the constitutional court the presidency was an idea created by the revolutionary youth and several political entities that feared “a repeat” of the SCAF experience in 2011. He also explains that the armed forces did not want to repeat the experience, and therefore, the choice seemed to please all parties involved.

Mansour was an obscure public figure at the time, as no one knew anything about him. Hearsay and rumours about Mansour were especially contradictory and as expected, the decision had both supporters and opponents. Al-Sinawy explains that other political figures seemed “grateful” for Mansour’s acceptance of the heavy burden.

The columnist denies that Mansour’s role in the 30 June events was marginal.

At first, everyone was eager to know what Mansour’s opinion was regarding what was happening and wondered why he was silent. Al-Sinawy attributes this to him being a judge, one who is used to observe silently first and then make up his mind according to the available evidence, rather than rushing to make a public statement. Al-Sinawy explains that Al-Sisi was careful to respect Mansour’s position, declining to speak with Barack Obama several times, and insisting that the calls be directed to Mansour instead.

In turn, Mansour denied that Al-Sisi ever demanded anything of him, ensuring that the relationship between the presidency and the military institution was smooth and free of competitiveness. “When it came to the sit-ins [dispersal] crisis, Mansour was adamant on protecting the country’s authority and stabilising security so as to prevent a chaotic situation. That is why he accepted ElBaradei’s resignation hours after he handed it [in] without consulting anyone,” Al-Sinawy writes.

Before Mansour, the presidency’s performance was confusing and unconvincing, and Mansour’s obscurity did not help improve its image. It took him some time to start to act as a trustworthy president. He handed most of the power to the prime minister, which garnered respect from the public.

The constitutional committee discussed the possibility of extending the interim president’s term to two years until things calm down, but the suggestion was quickly refused. The reason was the public’s demand that the transitional period end. Al-Sinawy explains that someone suggested that Mansour run for president, but he refused and seemed to incline towards retiring from the public life. “Returning to the constitutional court seemed inappropriate for him as he would be reviewing cases related to laws he issued as president,” Al-Sinawy writes.

Al-Sinawy concludes the article by suggesting that Mansour be given the position of president of the parliament, seeing that he is capable of achieving a consensus from the different political entities.

Writer Ezzedine Choukri Fishere begins the column by stating that social justice is one of the most important goals of a nation’s economy. He explains that there are various understandings of the term, and that it seems to stretch to fit the goals of others.

“Surely, no one would ever call for social injustice,” Fishere writes. “What do we mean –those calling for change- when we demand social justice to become one of the main goals of our new nation?”

He denies that social justice means taking from the rich and giving to the poor: “This is closer to social solidarity, and it is a humanitarian duty which the country should encourage, but usually falls on the shoulders of society’s institutions, whether civil or religious, involved in charity work.”

He explains that social justice means two things. Firstly, guaranteeing equality when it comes to the opportunities offered, meaning that every citizen is offered the same chance in education, growth and development.  He explains that this usually does not happen, which leads to poverty and unfortunate social conditions being inherited. The lack of equal opportunities mean that the rich stay rich and the poor stay poor, and the gap between them widens.

Secondly, the country should fight the market’s inclination to serve a certain group of entities or individuals and give them advantages that are unavailable to others, while oppressing other entities by giving them heavy burdens that they cannot bear.

“What decides the framework for salaries in society and how fair is it? Why would a waiter in a fancy restaurant get a salary worth a meal for four in this same restaurant? Are taxes distributed evenly over the different groups of society or is it unfair to the poor and the weak? Are the profits of economic growth distributed fairly? Are investment opportunities available to everyone or just the rich? Can an ordinary man start his own business or will the nation and market lead him to set fire to himself like Bouazizi?”

Fishere concludes his article by stressing that the government’s fight against these two points is key to achieving social justice.