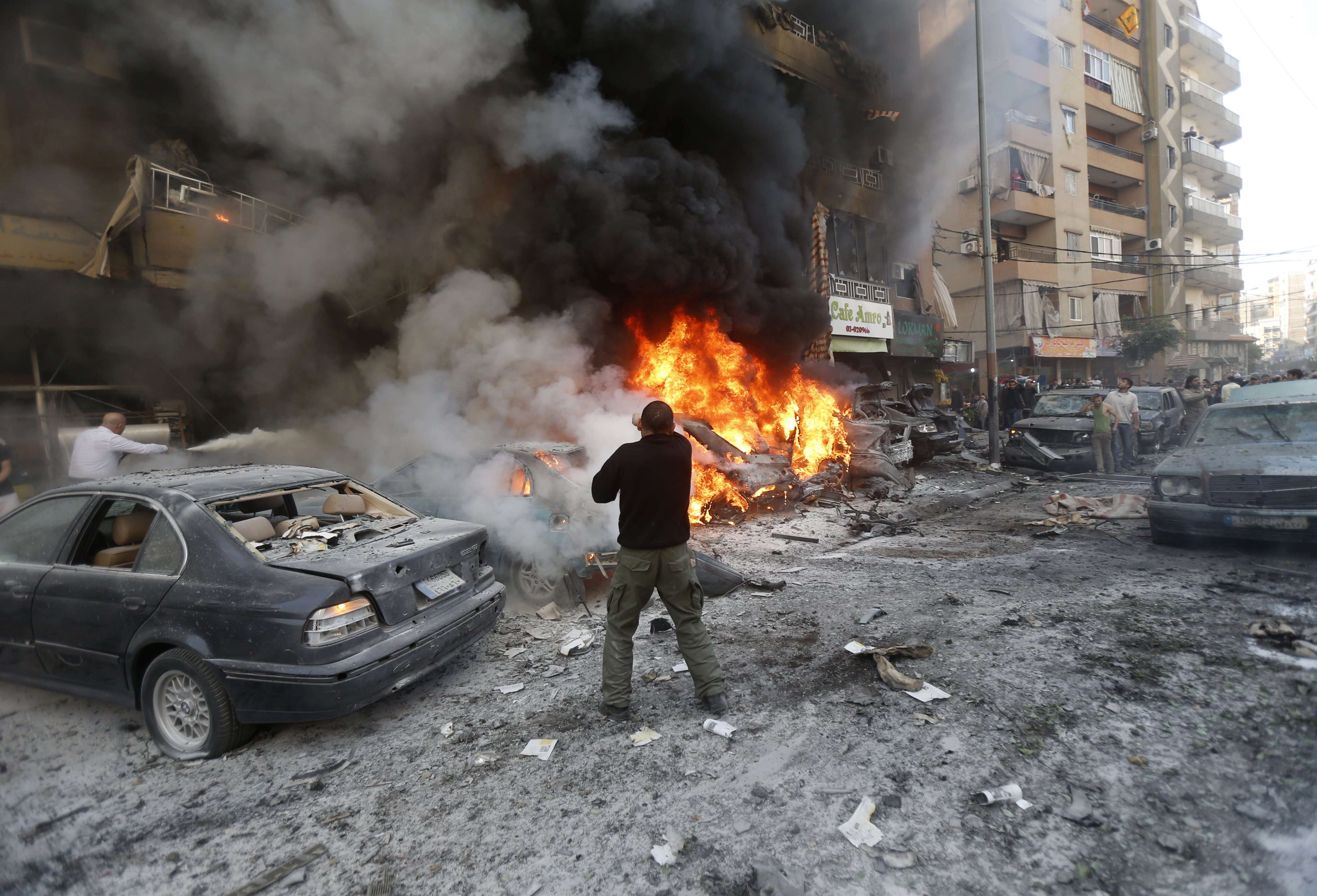 The blast was quickly claimed by Al-Nusra Front in Lebanon, a group believed to be linked to Al-Qaeda’s Syrian arm.

The army said it had discovered the remains of explosive devices, along with body parts apparently from the suicide bomber and an explosive belt that did not detonate.

Al-Nusra Front in Lebanon, in a statement on Twitter, said it was behind the attack.

“With the help of God almighty we have responded to the massacres carried out by the party of Iran [Hezbollah]… with a martyrdom operation in their backyard in the southern [Beirut] suburbs,” it said.

The blast took place on busy Al-Arid Street in the Haret Hreik neighbourhood, targeted by a suicide car bombing earlier this month.

An AFP photographer saw troops and Hezbollah security men deployed, as firemen worked to put out the flames and rescue workers took the wounded to hospitals.

The blast is the sixth to target areas considered Hezbollah strongholds since the group announced on 30 April that it was sending fighters to support President Bashar Al-Assad in neighbouring Syria.

And it was the third in a month.

Less than a week ago, a car bomb exploded in Hermel in the eastern Bekaa valley, killing three people. That attack was also claimed by Al-Nusra Front in Lebanon.

And on 2 January, a suicide car bombing claimed by the jihadist Islamic State of Iraq and the Levant (ISIL) killed five people on the same street targeted Tuesday.

While the attacks appear to be targeting the Hezbollah, the victims have all been civilians.

President Michel Sleiman urged “national unity,” which he said would “reduce the chances of terrorism, a phenomenon that must be fought hard and relentlessly.

France and the United States also condemned the violence and offering condolences to the victims.

Lebanon has suffered a spike in violence since the war in Syria broke out, with the frequency of attacks rising in recent weeks.

The conflict between Alawite Syrian President Bashar Al-Assad and a Sunni-led uprising has stoked long-standing tensions between Alawite and Sunni residents in the northern city of Tripoli.

On Tuesday, one person died of wounds suffered in the latest clashes there, and four soldiers were wounded, a security source said.

That brought to seven the death toll in three days of clashes between the Sunni Bab al-Tebbaneh and Alawite Jabal Mohsen districts.

Targeted attacks have also struck opponents of Hezbollah and Damascus.

On Friday, a day after the Hermel car bombing, eight people were killed in cross-border shelling of the Sunni frontier town of Arsal.

And on 27 December, moderate Sunni politician Mohammed Chatah, known for his opposition to Syria’s regime, was assassinated in a massive car bombing in central Beirut that also killed seven others.

“What should worry people is this frequency, the short time period between each bombing,” he told AFP.

Lebanon was dominated by Syria for nearly 30 years until its troops withdrew under pressure in 2005, and it continues to be deeply affected by events in its larger neighbour.

The conflict has contributed to a nine-month political impasse over forming a government, with the anti-Damascus March 14 movement and Hezbollah unable to reach a deal.

However, key March 14 figure and leader of the Future bloc Saad Hariri said Tuesday he was rescinding a previous refusal to join a government with Hezbollah.

“I have made this decision for the sake of Lebanon’s interests, rather than my own,” the former premier said.

The overture has raised hopes a new government could be in the works, which Shaikh said “may provide some antidote” to the violence.

“It would, I hope, illustrate that the main parties are not interested in this kind of thing… and that the finger points more to the Syrian side, whether it’s the Syrian regime or Sunni extremists fighting against it,” he said.