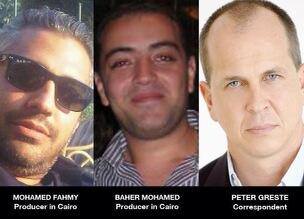 The letter, published early Saturday morning on the “Free Alaa” Facebook page, details both Greste’s imprisonment and his charges. The Al Jazeera journalist also mourns the condition of the other two men he was arrested with, as well as the present state of independent journalism in Egypt.

Greste, arrested with Mohamed Fahmy and Baher Mohamed on 29 December from a hotel room in Cairo, has been held in Tora prison under suspicion that he and the other crewmembers were members of the Muslim Brotherhood. “The state has presented no evidence to support [their] allegations, and we have not been charged with any crime. But the prosecutor general has just extended our initial 15-day detention by another 15 days to give investigators more time to find something,” Greste writes.

“He can do this indefinitely – one of my prison mates has been behind bars for 6 months without a single charge,” he continues.

Greste, who was only in Cairo for two weeks before his arrest, has spent more time in Cairo prison than on the ground. Only recently, he writes, was he allowed exercise time – “four glorious hours in the grass yard behind out block,” he writes.

Greste has been passed books, paper and pens by his neighbors, which allows for brief respite from the grueling monotony of life in Tora prison. “I want to cling to these tiny joys and avoid anything that might move the prison authorities to punitively withdraw them. I want to protect them almost as much as I want my freedom back.”

Mohamed Fahmy and Maher Mohamed are being held in Cairo’s “Scorpion” prison, a maximum security facility reserved for terrorism suspects. Greste notes that Fahmy, who suffered a shoulder injury just before his arrest, is forced to sleep on the ground and is denied hospital treatment. Both are held in their cells for 24 hours a day, without the “tiny joys” Greste is afforded.

“But this is not just about three Al Jazeera journalists. Our arrest and continued detention sends a clear and unequivocal message to all journalists covering Egypt, both foreign and local.”

Greste’s letter closes with a call for “loud and sustained pressure from human rights groups, individuals and governments who understand that Egypt’s stability depends as much on its ability to hold open honest conversations among its people and the world, as it does on its ability to crush violence.”

Arrests of both activists and journalists have been on the rise since Mohamed Morsi’s ouster on 3 July. Abdullah El-Shamy, also an Al-Jazeera journalist, was arrested after the Rabaa sit-in dispersal. He has been held without charges in prison for over six months, and recently began a hunger strike to protest his imprisonment.

It is still unclear whether or not the case against Greste, Fahmy and Mohamed will go to court.