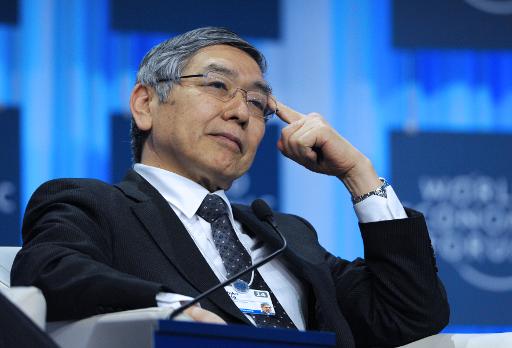 AFP – The leaders of the world economy expressed cautious optimism over the prospects for the global economy this year as the Davos forum wrapped up on Saturday.

Speaking on a panel of ministers, central bankers and top business leaders at the World Economic Forum, the governor of the Bank of Japan Haruhiko Kuroda said: “We have to be mindful of downside risks, but I think we can be cautiously optimistic about the global economic outlook.”

The US economy is slated to grow faster than 3% this year and next year, he said, while Europe is “finally recovering.”

“Emerging economies like India as well as China, Indonesia and others, their economic growth rate is likely to be maintained at a high level or likely to accelerate,” forecast the central banker.

German Finance Minister Wolfgang Schaeuble told the assembled global elite that the eurozone crisis was no longer top of the agenda.

“The eurozone overall is no longer the centre of all the concerns of the world economy. It’s fine,” he said.

Perhaps surprisingly, it is the countries that required a bailout that have performed the best, the minister said “because they delivered what had to be delivered.”

“Ireland did very well. Portugal is doing very well. Spain did extremely well. Greece did much better than anyone thought it would two years ago, to be very frank,” he added.

However, the managing director of the International Monetary Fund, Christine Lagarde, pointed out a “new risk on the horizon” related to the withdrawal of the US Federal Reserve’s stimulus.

“It needs to be really watched,” she cautioned, amid concerns that emerging market economies such as India and Brazil are going to suffer as investors pull out their capital.

However, the chief of BlackRock, the US investment fund that manages nearly $4tn in assets, said that poor domestic policy was more often to blame for difficulties in emerging markets.

“It’s a convenient excuse to say tapering is the root cause of all evils. It’s simply not,” Larry Fink said.

Lagarde said a further risk was the 15 to 20% chance that the eurozone falls into deflation although European Central Bank President Mario Draghi shrugged off this concern.

While the mood at Davos on the economy has been palpably more bullish than in previous years as the debt crisis in the eurozone and the risk of a collapse of the common currency has dissipated, not everyone was optimistic.

Fink said the market volatility in recent days, with 14% being wiped off the Argentinean peso in two days of panic selling, would likely continue throughout the year.

“I just see way too much optimism now. The experience of the market place this past week is going to be indicative of this entire year,” he said.

“We are going to be in a world of much greater volatility.”