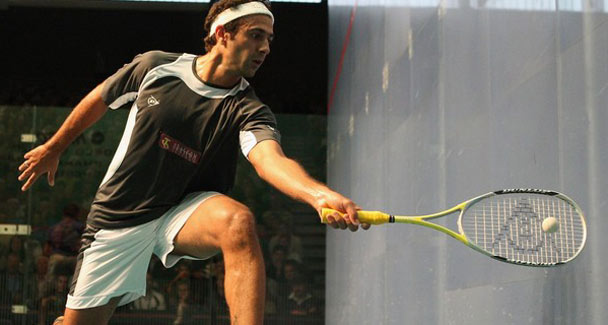 Just 24 hours after winning his first major PSA World Tour ranking title for more than two years at the JP Morgan Tournament of Champions in New York, Egypt squash maestro Amr Shabana maintained his winning ways some 1,000 km away in Detroit, Michigan, where he defeated compatriot Omar Abdel Meguid in the opening round of the Motor City Open.

The PSA International 70 event at Birmingham Athletic Club in Bloomfield Hills, Detroit – one of the longest-established events on the PSA Tour, first staged in 1999 – has attracted a star-studded field including 50% of the players in the world top 20, and four former champions.

“Omar has incredible hands, a very wide reach and any loose shots he’s going to put away,” said former World No.1 Shabana later. “That’s why the second game was crucial. If he would’ve won that second game, it could’ve turned the match around so that’s I really pushed it.”

“Tarek is a very good player and I have never beaten him before,” said Tuominen. “He’s so precise and hits ball a lot to the front, but I was able to get most of them back. I just managed to keep my game accurate enough, not give him many opportunities so that he made some mistakes and punish him a little bit when he came to the front and move him around.

Tuominen, the 34-year-old World No.28, now faces favourite Mohamed Elshorbagy, the World No.4 and 2011 champion from Alexandria who despatched French qualifier Gregoire Marche 11-2, 11-6, 11-5.

Second seed Karim Darwish leads Egyptian interest in the other half of the draw. The 2010 champion, ranked 6 in the world, beat Egyptian qualifier Marwan Elshorbagy 12-10, 11-9, 11-3.