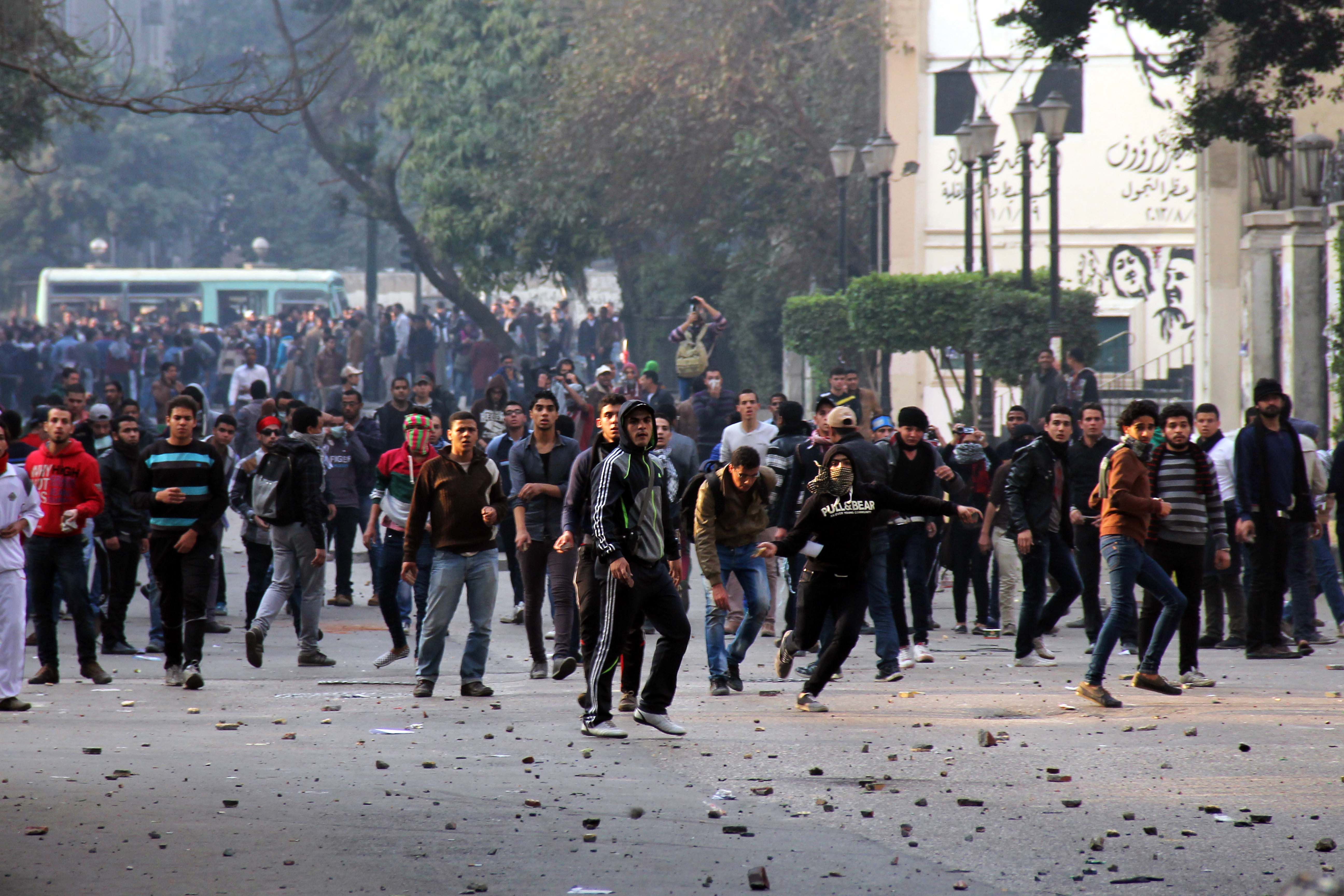 The Ministry of Health released a statement Sunday saying that 49 protesters were killed in clashes with security forces Saturday during the third anniversary of the 25 January Revolution. Violence spiked in the afternoon and the evening as clashes raged in the Alf Maskin and Matareya neighborhoods of Cairo.

Clashes erupted shortly after noon, as crowds gathered at mosques throughout the capital to form marches. A number of the marches were broken up quickly, but others were able to pass through downtown where trouble erupted.

Fierce fighting crippled downtown mid afternoon, especially near Talaat Harb Square. Protesters were chased by police vehicles and plainclothes policemen as tens of thousands of supporters of the interim government gathered in Tahrir, a mere 400 metres away, calling for General Abdel Fattah Al-Sisi to run for president.

A stage was set up for musicians and various speakers, while flags and coupons for free blankets were dropped from helicopters that circled above.

As a majority of protesters were pushed out of downtown, a relative calm returned to the streets, broken only by the occasional boom of fireworks and the sound of helicopters over Tahrir.

A vast majority of Saturday’s violence took place in the neighborhoods of Alf Maskan and Matareya. Residents reported that as night fell in Alf Maskin, a bastion of pro-Morsi resistence, helicopters circled over a dark square in which protesters clashed with security forces for hours.

Gunfire was audible in the surrounding area.

The Nadeem Centre human rights organisation released a statement Sunday with the names of 53 protesters killed yesterday, alongside the cause and location of their death. At least 28 were killed with live ammunition.

Twenty were killed in Alf Maskan while 24 were killed in Matareya. A live-stream broadcast online from the Alf Maskan “field hospital” showed gruesome and bloody images of wounded and motionless bodies as bystanders wrapped heads and arms in gauze.

The Ministry of Health stated that the 49 reported deaths took place in the governorates of Minya, Giza, Cairo and Alexandria. The injuries also took place in Fayoum, Ismailia, Assiut, and Beni Suef.

The Ministry of Interior announced that 1079 people were arrested on Saturday, the third anniversary of 25 January revolution.

The ministry’s media center did detail the number of arrests in each governorate.

According to Lawyer Ramy Ghanem, 57 people were handed a 15-day-detention after being interrogated in Dokki Police Station having been arrested for participation in clashes outside Mostafa Mahmoud mosque, while 60 others, arrested after participation in the same incidents, were interrogated by Agouza Prosecution in Central Security Forces camp in 6 October city.

Several rights lawyers, including Mahmoud Belal, have said that there is a “very high” number of arrests to deal with, and voiced their concern that interrogations are taking place in police stations

Prominent rights lawyer Gamal Eid said “we are always against the usage of police stations as venues of interrogation.”

Eid added, “justice belongs to the courts, we are seeing that there is a flaw in the foundation of justice and that the security apparatus is becoming more vicious.”

Minister of Justice Adel Abdel Hamid and General Prosecutor Hisham Barakat visited Minister of Interior Mohamed Ibrahim on Sunday. During the meeting, Abdel Hamid and Barakat stressed on “the great role played by the interior ministry in protecting freedoms , respecting human rights, providing security, applying laws strictly and protecting the nation” according to a statement issued by the interior ministry.

They also praised “the fruitful cooperation” between police, prosecution and judiciary that led to setting the ideals of truth and justice, and protecting freedom and stability, said the statement.

During the meeting, Ibrahim said that security and justice are “great blessings” that Egypt enjoy.

Clashes between protesters and security forces backed by civilians have grown bloodier after the ouster of Mohamed Morsi on 3 July 2013.

The Ministry of Health statement said that hospitals are on “high alert” and ready to face “any emergency situation”.