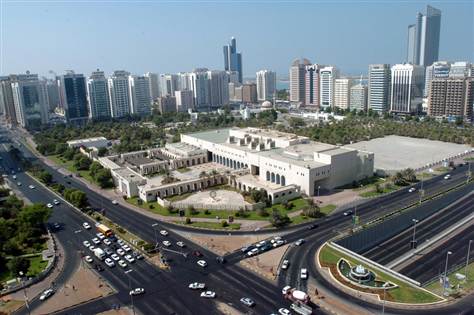 Prime residential sales prices jumped 25% in 2013, with an increase of 6% in the fourth quarter alone, Jones Lang LaSalle said.

Rents in prime residential projects increased 17%, with a rise of 8% in the fourth quarter, driven partly by the creation of new jobs in Abu Dhabi and the removal of a 5% cap on rent rises, it said.

Abu Dhabi’s real estate market slumped about 50% from its peak in 2008 after the global financial crisis triggered a crash. The Jones Lang LaSalle report suggests Abu Dhabi may now be recovering roughly as fast as neighbouring Dubai.

The capital of the United Arab Emirates has been making attempts to boost its residential market through new rules for the last couple of years.

In 2012, Abu Dhabi pressed public sector employees who reside outside the emirate to relocate within its borders, which analysts said aimed to address heavy oversupply in its real estate market. Many employees commuted daily from Dubai.

Last November, Abu Dhabi scrapped a 5% cap on annual rent increases. The cap had been imposed in January 2008 after surging demand drove rents and inflation higher.

“The Abu Dhabi market looks positive in the medium term, but there will be selective strong performers specific to sectors, locations, user requirements, property management and overall infrastructure.”