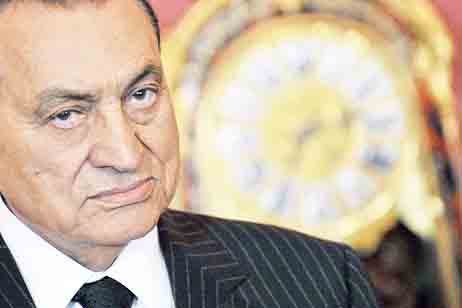 Reuters – Three years after the fall of Hosni Mubarak, Egypt’s political future is uncertain but its economy may have stabilised enough to fuel a strong recovery of its financial markets this year.

Forty-nine people were killed during anti-government marches on Saturday, and a car bomb and an exchange of gunfire near a police camp in Suez city were further evidence that a long-term conflict with Islamist insurgents may be developing.

But the stock market is largely ignoring such events; up 61% from last June’s low, it is within a whisker of regaining the January 2011 high hit before the start of the revolution that toppled Mubarak. Prices of the country’s international bonds are surging.

These are signs that for many investors – including some foreign ones – the country has turned the corner.

“Egypt is reaching a ‘new normal’ in which the environment is not perfect but it is better than it has been for several years,” said Sherif Salem, portfolio manager at Abu Dhabi investment firm Invest AD.

He and other fund managers see three planks to the recovery. Although deep political fissures in Egypt have not closed, this month’s referendum approving a new constitution has cleared the way for presidential and parliamentary elections.

So by the end of 2014, Egypt may have a democratically elected government for the first time since the army deposed Islamist President Mohamed Morsi last July, a year after he was voted into power.

In a throwback to the Mubarak era, the president may be a military man, Abdel Fattah Al-Sisi, now promoted to field marshal, but many would welcome him as offering stability.

Secondly, Morsi’s chaotic government has been replaced by a technocratic cabinet of experienced economic policy-makers. And thirdly, for the first time since Mubarak left, Egypt has money to spend on rebuilding the economy, thanks to more than $12bn of aid promised by Gulf Arab states after Morsi left.

In at least one way, the outlook for Egypt is actually better now than it was in early 2011: the global economy is stronger, Salem said.

“I’m hearing in my conversations with bankers that for the first time, multinationals and other big companies have budgeted for capital spending this year” in Egypt, he said.

The economic recovery may not be fast. The International Monetary Fund projects growth of 2.8% this year, up from 1.8% in 2013 but well below the roughly 5% which analysts say is needed to cut youth unemployment, estimated at around 20%.

Egypt’s economy was growing at about 6% annually for several years before Mubarak was ousted. Even that was barely enough to produce work for the large number of Egyptian youths entering the job market – one of the drivers of the uprising.

The country’s twin deficits, which brought the economy close to crisis last year, look unlikely to narrow much any time soon. The IMF projects the state budget deficit will stay above 14%of gross domestic product – a level seen in Greece during the depths of its debt crisis – at least through 2018.

Egypt’s deficit in trade of goods and services is forecast to widen to $16.5bn in 2018 from $2.3bn in 2014. So Egypt may need periodic injections of fresh budget and balance of payments support from the Gulf for years to come.

And in a sign of the continued problems that some firms have in Egypt, the London-listed shares of oil and gas firm BG Group sank as much as 15% on Monday after it cut its production forecasts for this year and next, accusing the Egyptian government of not honouring agreements on BG’s share of gas from fields.

The current level of political violence is hurting tourism, a key generator of foreign exchange and jobs; any escalation of street clashes to last summer’s levels, when hundreds of people were killed in a single day, could damage the entire economy.

“A return to the violence that followed the ousting of former president Mohamed Morsi could quickly nip Egypt’s economic recovery in the bud,” said Jason Tuvey, economist at Capital Economics in London.

But Hesham Saad, Cairo-based investment director at emerging markets asset manager Silk Invest, said that by stabilising the Egyptian pound and making investors more confident, the aid from the Gulf had started money flowing through the economy again.

Most big listed companies in the stock market enjoyed double-digit earnings growth last year and in 2014, banks, pharmaceuticals and other sectors dependent on consumer spending are likely to see growth of 15 to 18%, Saad estimated.

That leaves the group of Egyptian stocks which Silk Invest follows trading at about 10.5 this year’s earnings, compared to around 14 to 15 times in the years before the 2011 revolution – implying as much as 50% upside for the market, he said.

Figures from fund data firm EPFR Global suggest the start of a return of foreign money to Egypt’s stock market; after a net outflow of $55.75m in 2012, Egyptian-focused equity funds saw an inflow of $3.68m last year.

Fund managers say most of the foreign money is from relatively small investors specialising in emerging markets, such as Silk Invest, and from Gulf investors, who are encouraged by their governments’ support of Egypt. Most big European and US funds are still absent, waiting for more political clarity.

This implies plenty of room for inflows to increase in the future. Fund managers estimate the stock market, with a $63bn capitalisation, is now about 10-15%owned by foreigners; in normal times the ratio was around 20-25%.

There is so far no indication of big flows of foreign money back into Egypt’s debt. Foreign holdings of Egyptian Treasury bills totalled EGP 64.8bn ($9.3bn) in September 2010, before they plunged to just EGP 698m in March 2013, according to the latest central bank data.

Gabriel Sterne at Exotix, a frontier market investment bank, said foreign holdings were now estimated to have risen, but only to EGP 1.2bn.

“Foreigners are going to go back into equities first. There is still a risk of currency depreciation and there is more direct currency risk with the T-bills – they will be a bit slower to go back in there,” Sterne said.

But there are some tentative signs of renewed foreign interest in Egyptian debt. Early this month the yield on Egypt’s $1bn sovereign bond maturing in 2020 fell below the yield on Lebanon’s 2019 bond for the first time in about a year; at B-minus, Egypt is actually rated one notch lower than Lebanon by Fitch Ratings.

Saad said Egyptian markets could expect larger inflows of foreign money after this year’s elections, which would reduce political uncertainty.

“US and European funds are still on the sidelines – most have expectations of the political situation that are a little bit exaggerated,” he said. “They will return eventually.”