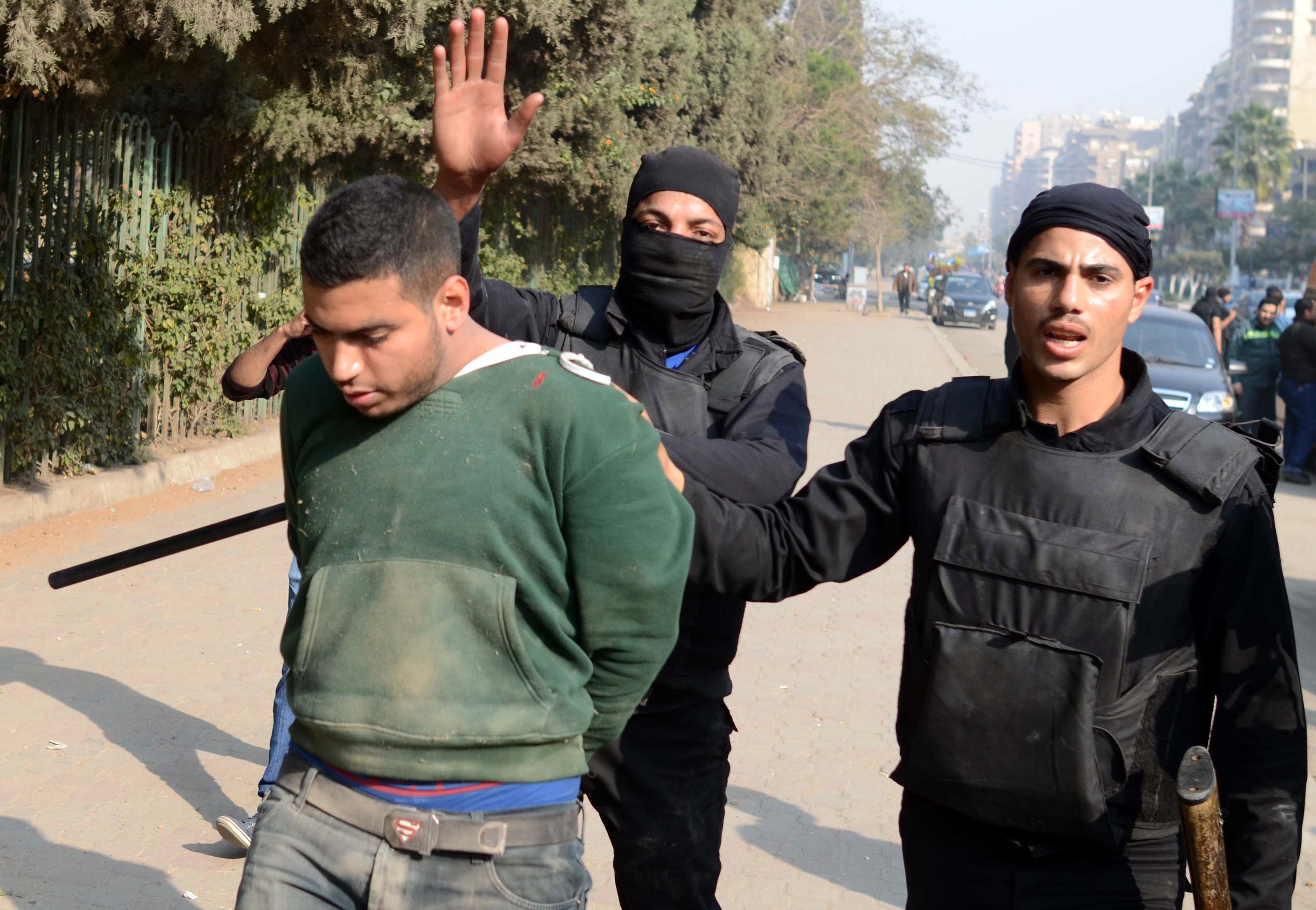 A group of 79 people arrested on Saturday have been ordered detained for 15 days by Al-Azbakeya prosecution, as members of civil society organistations hold their breath to learn the fate of the Maadi detainees.

Eight people also arrested on Saturday, which marked the third anniversary of the 2011 Revolution, were ordered released Monday on EGP 10,000 bail for each detainee by Qasr Al-Nil prosecution, the Association for Freedom of Thought and Expression said.

The Maadi prosecution ordered on Sunday the drafting of “Homeland Security reports to clarify if the detainees belong to the Muslim Brotherhood”, which was deemed a terrorist organisation by the government on 25 December.

According to human rights law centre AlHaqanya, four female detainees, including Hussein, were released Monday evening. Three of them were released on EGP 2,000 bail, with the fourth exempt from bail due to her status as a minor. The 16 male detainees, however, had their detention extended another fifteen days, the organisation confirmed.

A separate group of five detainees, also in Maadi, were released Monday night on EGP 2,000 bail.

Most detainees arrested on Saturday are accused of involvement in a banned organisation, an organisation that aims to disrupt the law or joining a mob, as well as other charges.

A total of 1,079 people were arrested Saturday, as the revolution’s anniversary was marred by deadly violence. Decisions on the detainees are being made by various prosecutions, depending on where they were arrested.

For most groups of detainees, the prosecution decided on Sunday to postpone the decision to Monday when it would receive reports from Homeland Security on the detainees, which it did in the case of 25 people arrested in Cairo’s Maadi neighbourhood. Only one group of detainees is known to have been investigated on Saturday evening.

A group of 60 detainees arrested in Giza’s Dokki neighbourhood who were ordered detained for 15 days. Ahmed Atef a researcher at the Egyptian Centre for Social and Economic Rights and a member of the Front to Defend Egyptian Protesters said the decision was made without the presence of a lawyer and even though a lawyer attempted to gain access, she was not allowed inside.

Preventing lawyers from accessing the investigations has been reported at other locations.

Lawyers attempting to provide representation for over 220 detainees investigated by the Abdeen prosecution at Tora Central Security Forces Camp were made to wait outside for hours on Sunday evening. Eventually, a few lawyers were allowed in after hours of waiting and after many had already left. The prosecution is set to decide whether this group leaves or faces charges on Monday afternoon.

Lawyer Amr Hassan who has been working with these detainees said “one of the first guarantees of a fair trial is the presence of a lawyer.” He added that the 2014 Constitution states that investigations are considered “void” if a lawyer is not present.

Hassan himself was not prevented from entering investigations but he said the case was different at the Giza Central Security Forces camp located on the Cairo-Alexandria desert road, where lawyers were barred from attendance in the investigations.

The majority of the arrests on Saturday were in Greater Cairo and the governorates of Alexandria and Daqahleya, Atef said.

A recent pattern he pointed to is that police “randomly arrest the largest number of people” and examine them, then some are released before an official complaint is drafted.

Another lawyer, Fady Wagdy from the Egyptian Coalition on Children’s Rights, said there are minors among the detainees, but the number of minors is still unknown. He added that the minors are not being separated from the adults in detention, in violation of the law.

Wagdy said it is also illegal to run investigations inside Central Security Forces camps. “But no matter how much we say this, they claim that it is done for security reasons.”  He said investigations are supposed to be conducted in court and in conditions where the detainee is not being subjected to physical or moral coercion.

Lawyers trying to assist the Maadi detainees were assaulted and threatened on Saturday.