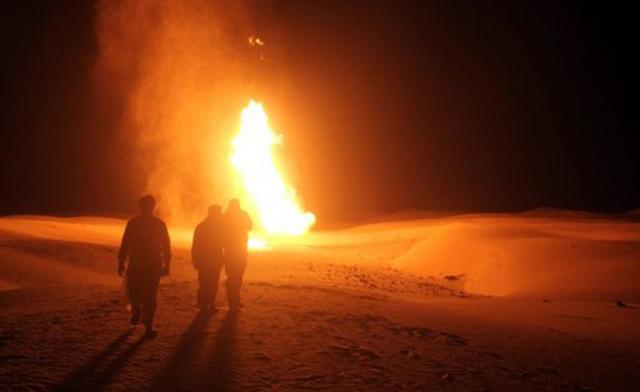 Unidentified gunmen bombed a natural gas pipeline 50km south of the Sinai town of Al-Arish late Monday evening. Security forces then arrested ten men as they tried to plant a bomb in the Kuthar district of Sheikh Zuweid.

The bombing, which caused no casualties, was confirmed by residents in the area. Flames were seen from the burst pipeline, leading GASCO to shut off the main valves in the area to quell the fire.

Monday’s bombing is the third this month, and the 19th since the 2011 uprising against ousted president Hosni Mubarak.

The same day, security forces reportedly foiled an attempt by Sinai based militants to plant a bomb in the Kuthar district of Sheikh Zuweid. The explosive device “accidentally” detonated and killed one of the militants, while security forces arrested ten others.

Thirty-one small houses, which are used as safe houses for militants, one car and four motorcycles were destroyed. The car and motorcycles did not have proper license plates, nor were they registered with local authorities.

Eight tunnels near Rafah were also destroyed Monday. The government claims that these tunnels were used to smuggle “weapons, ammunition, and explosives” to Al-Qaeda inspired militants operating in the Sinai Peninsula.

Attacks against security forces have been on the rise since Mohamed Morsi’s ouster on 3 July 2013. Ansar Beit Al-Maqdis, a group that formed in the desolate and underdeveloped area, has recently stage a number of brazen attacks outside the peninsula.

The group posted a video online showing a man firing a surface to air missile at the helicopter. The explosion downed the helicopter and killed all five soldiers on board.

Defence Minister Abdel Fattah Al-Sisi attended the funeral of the soldiers the next day.