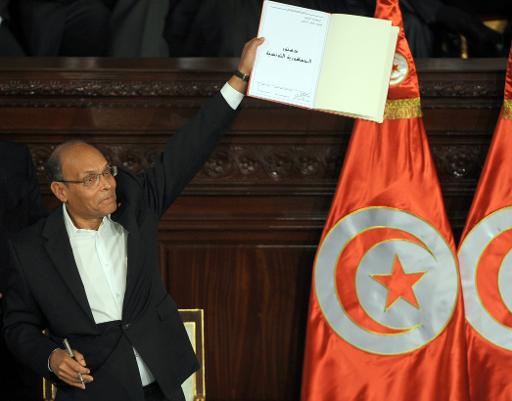 AFP – Tunisia’s leaders on Monday signed the new constitution adopted by lawmakers, a key goal of the revolution three years ago that touched off the Arab Spring.

The historic document, seen as one of the most modern in the Arab world, was signed by outgoing Islamist premier Ali Larayedh, Speaker Mustapha Ben Jaafar, and President Moncef Marzouki during a ceremony at the National Constituent Assembly.

“With the birth of this text, we confirm our victory over dictatorship,” Marzouki said before signing the document.

“Much work remains to make the values of our constitution a part of our culture”.

The charter, which took more than two years to draft, will enter into force in stages after its publication in the official journal, and in the run-up to fresh parliamentary and presidential elections later this year.

After months of political crisis, Islamist-linked violence and social unrest, Sunday’s vote set Tunisia on course to achieve at least some of the goals of the uprising that toppled longtime strongman Zine El Abidine Ben Ali in January 2011.

Celebrations erupted in the national assembly after the charter was overwhelmingly approved in a late night session that saw 200 members voting in favour, and only 12 against.

Foreign leaders welcomed the vote in Tunisia which, despite its own problems, is a beacon of hope compared with other Arab Spring nations like Libya and Egypt, both mired in instability and political turmoil.

“The United States continues to believe the Tunisian people can and will achieve their aspirations for a democratic society, and as a long-standing friend of Tunisia, the United States will continue to support Tunisia’s democratic transition,” she added.

Sunday’s vote was made possible by Ennahda’s agreement to relinquish power to end months of political deadlock, allowing technocrat prime minister-designate Mehdi Jomaa to form a government of independents.

Jomaa presented his line-up to the president late Sunday, before lawmakers voted on the constitution, and must now win a vote of confidence in parliament, scheduled for Tuesday afternoon.

Jomaa said his top priority will be to create the right conditions for legislative and presidential polls later this year.

The polls will mark the final step towards resolving Tunisia’s political crisis, triggered by the assassination of two prominent secular politicians last year by suspected jihadists.

“Within six weeks there will be an electoral law. There is a clear path to the next elections, which will probably take place in October 2014,” senior Ennahda official Ameur Larayedh told AFP.

The official dates of the elections must be decided by the newly appointed electoral body (ISIE), whose president Chafik Sarsar called Sunday’s vote a “big relief”.

“I hope the same atmosphere we saw yesterday will continue to lead the country along the right path,” he told AFP.

International credit rating agency Fitch called the approval of Tunisia’s new constitution an “important step” in reducing political uncertainty, but warned of the challenges in confronting violence and social discontent.

“The elections will test the extent to which social polarisation has permanently reduced political stability, and are no guarantee against further social and political fragmentation,” it said.

The EU’s Ashton urged the new government to deploy “all the means of the state” to organise transparent and credible elections as swiftly as possible.

The constitution – finally agreed on last Thursday after weeks of heated debate on issues such as women’s rights and the role of Islam – is a compromise which some observers have warned is at times incoherent or vague.

But it is widely regarded as the most progressive constitution in the region.

Executive power is divided between the prime minister, who will have the dominant role, and the president, who retains important prerogatives, notably in defence and foreign affairs.

Islam is not mentioned as a source of legislation, although it is recognised as the nation’s religion.