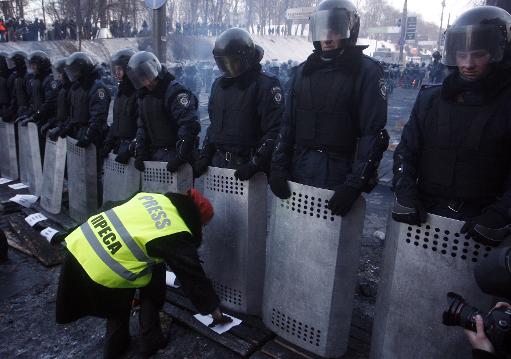 AFP – Prime Minister Mykola Azarov resigned on Tuesday in a bid to defuse Ukraine’s deadly crisis, giving in to months of pressure from demonstrators as parliament scrapped anti-protest laws that had infuriated the opposition.

Azarov said he had taken a “personal decision” to resign to keep Ukraine together as a state, as parliament met in emergency session to vote on reforms and amendments backed by President Viktor Yanukovych.

Parliament overwhelmingly voted to scrap anti-protest laws that sparked the current crisis when the ruling party pushed them through the Verkhovna Rada on 16 January.

The dramatic twists in Ukraine’s two-month crisis came as Russian President Vladimir Putin prepared to sit down with EU chiefs at a summit in Brussels expected to be dominated by the turmoil.

The European Union and United States cranked up pressure on Yanukovych to impose serious reforms to end a standoff that has turned parts of Kiev into a war zone patrolled by masked protesters and that has left three activists dead.

EU foreign policy chief Catherine Ashton brought forward a visit to Kiev by several days while US Vice President Joe Biden urged Yanukovych to work with the opposition on “immediate measures” to de-escalate the crisis.

In a morning announcement that took the opposition by surprise, Azarov yielded to months of pressure from the opposition who have made his resignation a key demand of protests based in Independence Square in Kiev.

Azarov said that he hoped his resignation would create “an additional possibility for a political compromise to peacefully resolve the conflict”.

“Today the most important thing is to preserve the unity and integrity of Ukraine,” he said.

The resignation still has to be approved by Yanukovych to take effect.

“This is not victory but a step to victory,” said Klitschko.

The opposition still wants to push their rebellion and oust Yanukovych from power, possibly through early elections which are currently due only in 2015.

Applause broke out in parliament including from opposition benches after the vote to scrap the protest laws, which passed with 361 deputies in favour and two against.

The laws ridiculed as absurd by activists, had outlawed protest convoys of more than five cars and imposed a ban on opposition activists from wearing masks or helmets.

With other concessions on the agenda including an amnesty for jailed activists, parliament adjourned until an afternoon session starting at 1400 GMT.

Amid a fast-evolving political situation the streets of Kiev were calm on Tuesday in contrast to days of clashes last week.

However the barricades built by protesters out of sandbags and which reach several metres high were still in place with the city centre now clearly divided between areas controlled by protesters and those by security forces.

Members of a radical splinter group of the protest overran the justice ministry building on Sunday but vacated it on Monday after an appeal from opposition leaders.

Western leaders are hoping for a breakthrough at the meeting of the Verkhovna Rada parliament — notorious for fistfights but so far meeting in an unusually calm atmosphere.

It is not clear who will replace Azarov as prime minister.

Opposition Fatherland party leader Arseniy Yatsenyuk formally rejected an offer to become prime minister himself, the presidency said overnight. Klitschko said he could not imagine himself in a government under Yanukovych.

Amid growing international concern on Ukraine, the European Union’s foreign policy chief Ashton is due to fly to Kiev after the EU-Russia summit in a flurry of diplomacy to end the deadlock.

US Vice President Joe Biden called Yanukovych on Monday and warned him that “declaring a state of emergency or enacting other harsh security measures would further inflame the situation and close the space for a peaceful resolution.”

Russia has slammed the protesters as extremists, with Foreign Minister Sergei Lavrov condemning them as “fascistic youth” and warning against outside interference.

But the West has voiced concern about police violence, and says Ukrainians’ right to protest and have a say in their country’s foreign policy should be defended.

The protests began in November as a drive for EU integration after Yanukovych under Russian pressure ditched a key deal with the bloc that had been years in the making.

They have since snowballed into a wider movement against his rule and have spread far beyond Kiev to outlying regions in a country twice the size of Germany.

Most worryingly for Yanukovych, the protests have spread into his heartland in majority Russian-speaking eastern Ukraine.