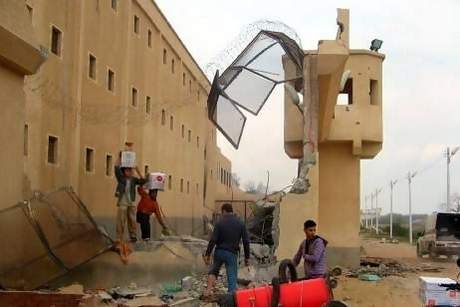 Hamas, some of whose members are among the 131 defendants in the case which had its first hearing yesterday, released a press statement on Tuesday saying “all these allegations are unfounded lies and fabrications that are unsubstantiated”. The statement added that the accusations were politically-motivated with the intention of targeting the resistance group.

“Egyptian accusations only serve the interests of the Zionist occupation, enemy to the President of Egypt and to Palestine,” it added.

The Muslim Brotherhood also released a statement, saying the trial was an “attempt to usurp the legitimate president [Morsi],” and also called it a “farce”.

The group said that the case did not hold “constitutional legitimacy” and “harms the judiciary and judges” due to the politicised nature of the trial and the circumstances, which “deviate from the rule of justice”.

The statement also criticised the circumstances in which the hearing itself was held on Tuesday, saying that the ousted president appeared as a “lion” and “held his head high with unfased resilience” despite being imprisoned and put in a soundproof glass box while the proceedings took place.

The Muslim Brotherhood also considered the allegations lodged against Palestinians and Hamas outlandish, saying that many of the claims relating to their alleged involvement were inconsistent and improbable.

“These farces, which they call a trial, will only increase the people’s determination to overthrow the coup,” said the Brotherhood.

The case, which will reconvene on 22 February, lists ousted president Morsi, Muslim Brotherhood Supreme Guide Mohamed Badie, his deputy Mahmoud Ezzat, Chairman of the Brotherhood’s Freedom and Justice Party Saad Al-Katatny, and 127 others for allegedly carrying out the 28 January 2011 prison break at Wadi Al-Natrun Prison. Morsi, who had been detained at that prison, was one of those who were freed as a result of it.

The case alleges that the prison break was “executed by the Muslim Brotherhood organisation in Egypt, some foreign states, Hamas, and Hezbollah”.

Tuesday was not the first time Hamas expressed criticism of the government established following Morsi’s ouster last July, along with Egyptian media outlets.

In November, the group said that various media reports were “attempts to tarnish the image of the Palestinian resistance, a movement which recorded significant success against the Israeli enemy,” while calling on the media to “stop promoting lies”.

Two weeks later Hamas cabinet spokesman Ihab Al-Ghosein criticised the closing of the Rafah border crossing, accusing the government of being “intent on tightening the siege on the Gaza Strip and escalating the humanitarian situation”.