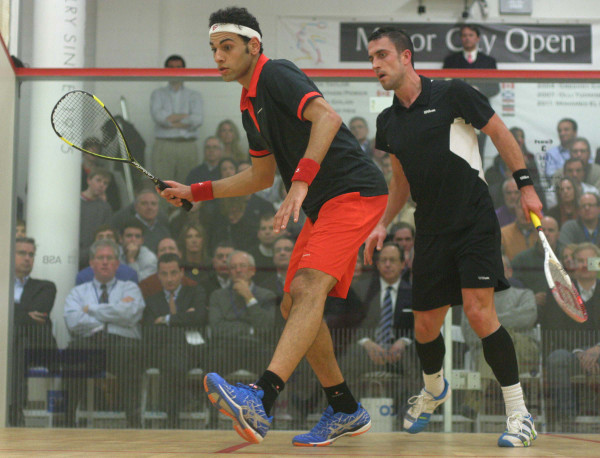 Top seed Elshorbagy, the 2011 champion, reached the final of the PSA World Tour International 70 event at Birmingham Athletic Club in Bloomfield Hills after an emotional first-ever victory over compatriot Amr Shabana, the defending champion, in the semi-finals.

Londoner Barker, the third seed back in Tour action after a two-month calf injury lay-off, leapt to a two-game lead in the final.

But Elshorbagy, the 23-year-old World No.4 from Alexandria enjoying the best period of his career to date, established significant early leads in the next three games before ultimately closing out the 92-minute match 8-11, 12-14, 11-4, 11-6, 11-7 to win the second biggest PSA World Tour title of his career.

For his efforts, Elshorbagy won $11,000 in prize money and a $9,000 Rolex Oyster Perpetual watch, courtesy of Greenstone’s Jewelers.

“I’m happy to win my second Rolex now,” said UK-based Elshorbagy. “It’s an amazing feeling knowing the only other player who has won this tournament twice is Jonathon Power. It’s such an honour to put my name up there with him.

“Peter played so well in the beginning of the match,” the champion continued. “It wasn’t his length game that surprised me, but his short game. His short game has improved a lot.

“Losing the second game that way was really tough, but I came back and told myself I have to find a way to win. It doesn’t matter how, I’m going to find it. I just had to be strong mentally and that’s what all the top players do. That’s what I learned from players like [Gregory] Gaultier, [Amr] Shabana and Nick [Matthew]. I thought ‘Okay, I’m going to cut the errors, be really patient and if he’s one of the best players on the tour in the length game, I’m going to try to match him and go for the shot when I’m 100 percent sure that it’s going to be the right one’.

“After I had that lead in the third game, my length started getting better and my confidence came back as well, so I had more options to go short,” added Elshorbagy. “But credit to Peter for coming back the way he did from the injury he had. It was such a fair match and I’m happy this tough battle was as close as it was.”

Barker, the World No.8 who was celebrating his 24th Tour final appearance, was not unhappy with his Motor City debut: “As the game went on, my body started breaking down a little bit. I need my movement because retrieving and making my movement hurt people is my game. But more credit to him because he stuck in there and upped the pace.

“I’ve heard great things about this tournament and I’m sorry it took me until I was 30 to come,” added the left-hander. “But all the good things you hear about it on the tour are true. I’ll be back.”