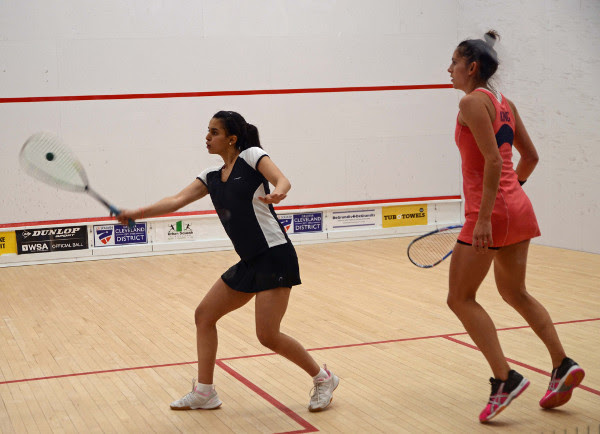 “El Tayeb played a fantastic match, being aggressive and retrieving really well,” reported tournament director Joe Russell, the club’s Director of Squash. “She was not making any errors and was anticipating much of King’s shots. King did not have a great match. She did not seem comfortable on the court making errors on easy shots.”

Au, the reigning Asian champion from Hong Kong, took on No7 seed Jenny Duncalf, the former world No2 from England who held an unbeaten 2/0 Tour head-to-head record over the 24-year-old.

The Hong Kong number one dispatched Duncalf in straight games, winning 11-5, 11-9, 11-3 to achieve her career breakthrough.

“Au was very good today at slowing the pace down and lobbing the ball into the back corners,” explained Russell. “It was clearly giving Duncalf trouble. Duncalf was down 9-5 in the second game and it looked like she was about to gain control of the match. However, Au had enough of a cushion to take the game 11-9. The third game was all Au as she cruised to the 3/0 victory.”

Top seed Nicol David, the world number one from Malaysia expected to reach the final for the fourth year in a row, was in sparkling form as she defeated Nour El Sherbini – the second Egyptian qualifier in the draw – 11-2, 11-8, 11-3.

“She was very methodical, moving the ball on court, not making any errors,” said Russell. “Nicol’s only scare was in game two, when she went down 7-2, before storming back to take the game 11-8.”

“I am just happy to get through that match as it was a tough first round for me to have,” said Massaro, the world No2 from Preston. “Madeline is a very tough competitor!”

Perry- the 14 times Irish champion and a Cleveland Classic semi-finalist for the past three years- said; “It is a shame because I played well all though the match but I came off the pace a little in the last two games. Laura played a great match.”