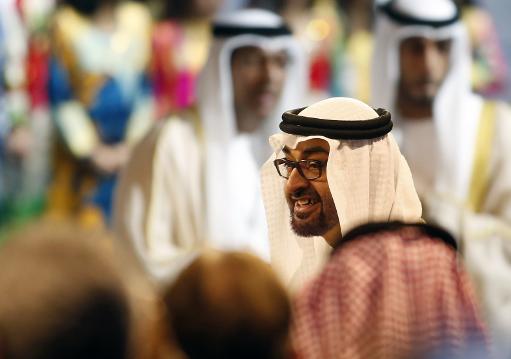 “There are no disputes between the brothers” said Abu Dhabi’s strongman, who is also deputy commander of the UAE armed forces, in remarks carried by WAM state news agency.

“Differences take place between brothers in one family, but nothing can separate between us and our brothers in Qatar,” he said, stressing that he enjoys strong links with Qatar’s emir, Sheikh Tamim bin Hamad al-Thani.

Abu Dhabi summoned Doha’s envoy on Sunday to protest against “insults” to the UAE made by Egypt-born cleric Yusef al-Qaradawi, who is based in Qatar.

The spat was the first of its kind by a member of the six-nation Gulf Cooperation Council — Bahrain, Kuwait, Oman, Qatar, Saudi Arabia and the United Arab Emirates — against another GCC state since the bloc’s formation in 1981.

In a weekly Friday prayers sermon in Doha last month, Qaradawi lashed out at the UAE, accusing it of “standing against Islamist regimes, punishing its leaders and putting them in jail”.

His comments came just days after the UAE jailed a group of 30 Emiratis and Egyptians to terms ranging from three months to five years for forming a Muslim Brotherhood cell.

The Brotherhood is banned in much of the region, and the UAE, Kuwait and Saudi Arabia pledged billions of dollars in aid to Egypt after the overthrow of Morsi, who hails from the Islamist organisation.

Qatar, however, has backed the Brotherhood in several countries swept by the Arab Spring uprisings of 2011, and has criticised Cairo for banning the group and launching a deadly crackdown against it.

On Saturday, Qatari Foreign Minister Khaled al- Attiyah disavowed Qaradawi’s remarks, saying “they do not reflect Qatari foreign policy” and insisting that ties between the two nations are “strategic in all aspects”.

But the UAE foreign ministry said that response “did not reflect a decisive stance rejecting Qaradawi’s speech”, and therefore Abu Dhabi had to take “an unprecedented measure” and summon Doha’s ambassador.