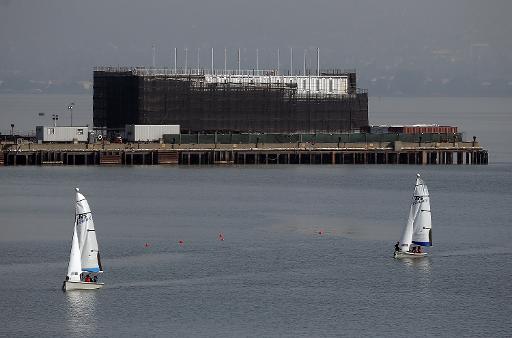 AFP – A mystery barge being built by Google on a pier at a former Navy base in the San Francisco Bay may be told to cast off.

It turns out that officials running the base while it is in the process of being turned over to the city of San Francisco don’t have permits for the Internet titan or anyone else to construct a vessel on the shore of Treasure Island.

“This is Google’s vessel, but we are not dealing with them,” San Francisco Bay Conservation and Development Commission regulatory affairs director Brad McCrea told AFP.

“It is the pier that doesn’t have permitting; whether they use it to build a barge or a speed boat of have a rodeo, TIDA doesn’t have the authority to do anything.”

McCrea was referring to the Treasure Island Development Authority, which is running the former Navy property as it makes the bureaucratic transition into the hands of San Francisco.

The state commission sent a letter to TIDA stating that it had received complaints about work on a ‘Google Barge’ and, after investigating, determined that no permits were issued to use the pier for that or any other project.

If the proper permit isn’t obtained in within about a month, the authority could be hit with a fine of $2,000, according to a copy of the letter obtained by AFP.

The situation could be resolved by simply moving the barge, or by getting a permit.

Commission officials have met with Google, but the permit issue is a matter to be resolved by TIDA.

Google is using shipping containers to turn the barge into a vessel that will evidently be used as an event space; to showcase technology, and for marketing, according to the commission.

Google is also working to get the necessary approvals from the US Coast Guard for the waterborne creation.

“They have been very cooperative,” McCrea said of Google. “I have every confidence this will be resolved.”

The Silicon Valley-based Internet titan has said little about the barge, which is reported to be one of four floating “interactive spaces” the company is having built on US coasts.