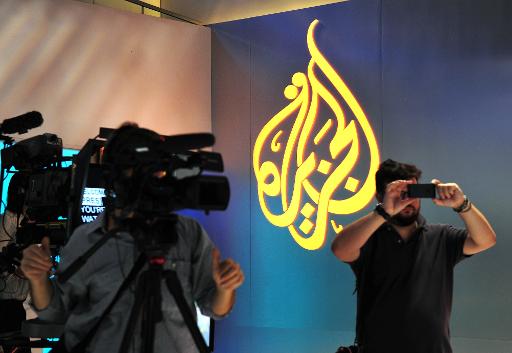 AFP – Less than half the journalists accused by Egypt’s military-installed authorities of being part of a “terror cell” involving Qatari-owned broadcaster Al-Jazeera actually work for the network, the channel said Thursday.

Egyptian prosecutors on 31 January referred to trial 20 journalists allegedly working for Al-Jazeera after accusing them of portraying Egypt as being in a state of “civil war” and “airing false news.”

The Doha-based network has angered Egypt’s new military-installed authorities for its coverage of a deadly crackdown on the Muslim Brotherhood and supporters of Islamist president Mohamed Morsi, who was deposed in July.

“The list of people being pursued by the Egyptian authorities in the case involving Al-Jazeera English’s detained journalists has finally been officially served,” the network said in a statement.

“Nine network staff are on the list of 20, meaning most of those named are not employees of Al-Jazeera,” it said.

“The charges should be dropped, and all of our journalists who are in prison in Cairo should be freed immediately,” said Al Jazeera English managing director Al Anstey.

The journalists on trial include 16 Egyptians, two of whom have been in jail since the summer, and four foreigners — Australian Peter Greste, Britons Sue Turton and Dominic Kane, and Dutch journalist Rena Netjes.

Only Greste is in custody as authorities say the other three foreigners are “on the run from the law.”

Netjes fled Egypt on Tuesday and says she could have been implicated in the case over a conversation she had at a hotel lobby in December with Al-Jazeera English’s Cairo bureau chief, Canadian-Egyptian Mohamed Fahmy, who is now in custody.

“I never worked for Al-Jazeera, ever,” she wrote on Twitter.

If convicted, the foreigners could face up to seven years in jail and the Egyptians 15. Officials also say the defendants were operating without official accreditation.

Greste, Fahmy and Egyptian producer Baher Mohamed were arrested on 29 December in a Cairo hotel.

Fahmy, a well-known journalist in Cairo who previously worked with CNN, has no known ties with the Brotherhood.

Greste formerly worked for the BBC and won the prestigious Peabody Award in 2011 for a documentary on Somalia.

The United States, press freedom groups and scores of journalists have protested against the detention of the reporters.