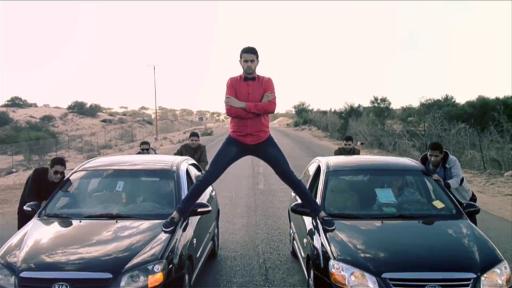 AFP – Hemmed in by Israeli and Egyptian blockades, Gaza is plagued by long and frequent power blackouts, prompting some residents to try to lighten the mood with dark humour.

Gaza ensemble Tashweesh — Arabic for “interference” — has posted on YouTube a parody of a truck ad in which Belgian action film star Jean-Claude Van Damme does the splits between two moving lorries.

In the Gaza spoof, actor Mahmud Zouaiter, 28, repeats the feat, this time astride two family cars being pushed down a road in the coastal Palestinian territory, where empty fuel tanks are commonplace because of chronic fuel shortages.

“Van Damme is not necessarily better than me, but unfortunately there is no petrol in town,” Zouaiter says in the clip’s narration.

“Electricity is cut off for 12 hours a day and the water stops flowing when there is no current (to pump it),” he adds. “I’d really like to have a shower.”

His video, which can be seen here: has so far attracted more than half a million hits.

Zouaiter, from Gaza’s Deir el-Balah refugee camp, told AFP he chose to model his spoof on Van Damme, “who is known throughout the world, to send a message, because the world is responsible for the crisis in Gaza”.

Gaza has been under an Israeli blockade since 2006, when militants kidnapped a soldier in a cross-border raid. The closures were tightened after Hamas took over a year later, with crippling restrictions imposed on movement as well as the import and export of goods.

Supplies smuggled in from neighbouring Egypt initially eased the situation, but much of the smuggling tunnels were destroyed following the military’s July 2013 overthrow of Islamist president Mohamed Morsi, seen as a Hamas ally.

Formed last May, Tashweesh’s six volunteer members have been creating scripts, sketches and video clips for official Palestine TV with a camera imported from Egypt for 6,000 shekels ($1,700), Zouaiter said.

Blending satire, social commentary and agitprop, the group has so far been tolerated by the territory’s Islamist Hamas rulers, and through social media it is creating a buzz beyond the strip’s narrow confines.

“We weep and we joke at the same time,” said Zouaiter, a trained nurse and graduate in Arabic and communications.

“The Gaza crisis pushes us to be creative. We don’t have material things but we have our brains and we don’t need money to come up with good ideas,” he said.

“We speak for all Palestinians, especially the young. Comedy is a way of expressing their frustration, to make peace,” he added.

Zouaiter is not the only one in Gaza using black humour, which he likens to a “new colour” in the tragic Palestinian canvas, to rally his people and attract outside attention.

There is no shortage of subject matter.

Besides the blockades and the conflict with Israel, there are issues such as corruption, child labour, the plight of the handicapped, child marriages and exorbitant wedding costs.

“Here it’s best to be single to live well, and if you want to be rich, buy yourself a municipality!” quips Islam Ayub, a jovial Gaza comic, wedding singer and father of six.

In one of his songs, he makes fun of the shortage of cement in the territory, asking “What are we going to build our tombs with?”

“For the first time in Gaza we can overcome all obstacles, all the checkpoints, and break the blockade thanks to new technology,” said Nabil al-Khatib, a scriptwriter and director of a TV production company who is close to Hamas.

“We don’t want to talk politics, even if we can’t completely ignore the politicians,” he said in an interview by candlelight during one of the strip’s regular power cuts.

“Everything is politics, even (earning) our bread, but in the end our message is humanitarian and art is a good vehicle.”

Humour is not lacking in the West Bank either.

The youthful organisers of “Operation Smile” stage street performances in Ramallah to mock the Palestinian Authority, the factional divisions and the empty rhetoric of political parties.