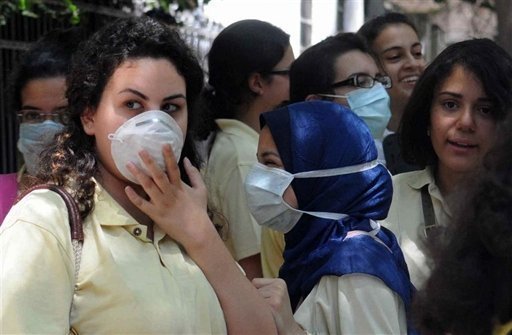 The Ministry of Health announced Thursday that the start of the school term may be postponed once again, Al-Ahram reported. One hundred and ninety-five cases of swine flu (H1N1) have been reported since December, which resulted in 24 deaths.

Health ministry spokesman Ahmed Helmi told Al-Ahram that the ministry would err on the side of caution for the students’ safety; if the death toll continues to rise, the ministry will delay the commencement of classes.

Dr Khaled Samir, treasurer for the Doctor’s Syndicate, said on Tuesday that “the most important thing… is small precautions”, adding that 99% of all infections can be avoided by wearing medical masks and vigilant hand-washing.

Samir also added that nine doctors have fallen ill and that there had been four deaths and two others in critical condition, but it is impossible to identify H1N1 as the cause of the widespread illness.

Al-Masry Al-Youm reported Friday that the Ministry of Health is short on H1N1 vaccines, which prompted medics to threaten a strike if they are not immunised. The newspaper reported that Minister Maha al-Rabbat had ordered the purchase of vaccines to immunise the medics, but the orders have not arrived.

The school year was already delayed to 22 February as a result of ongoing clashes between security forces and supporters of ousted president Mohamed Morsi.