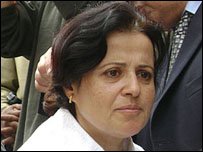 Secretary General of the Doctors’ Syndicate Mona Mina announced on Saturday her resignation from the position, citing her “failure to ensure the syndicate’s demands are met”.

In her statement, she said she felt she had failed to provide the doctors with their demands and improve their career situations. She is a member of the Independence List, the opposing faction to the Muslim Brotherhood in the Doctors’ Syndicate.

The Independence List has not been successful in providing “better pay, higher education, pension, health care, and a respectable, safe, working environment” for its doctors, Mina stated. However, she is “positive that it is achievable if the syndicate bands together, stands united and acts with patience”.

Mina added in her statement that she felt she was required to fix things with a “magic wand”, which she said she cannot do, adding that the Muslim Brotherhood faction of the syndicate, Doctors for Egypt, will likely attack the Independence List with accusations of failure. She concluded her statement by saying that she believes the syndicate’s rights will be attained if the entity works together and remains united.

Treasurer of the Doctors’ Syndicate Khaled Samir said: “No official resignation has been submitted to the board from Mina, and if one is, in fact, submitted, it will probably be refused.” He added that in the case that she insists on resigning, a board member will be nominated to replace her.

Samir stated that the board is against Mina’s resignation, adding that he “believe[s] in her and became a board member because she ran”.

Mina is the first Coptic Christian and woman to hold such a position in the Doctors’ Syndicate, and led the faction responsible for toppling the Muslim Brotherhood’s Doctors for Egypt, who have been in power for over 20 years.