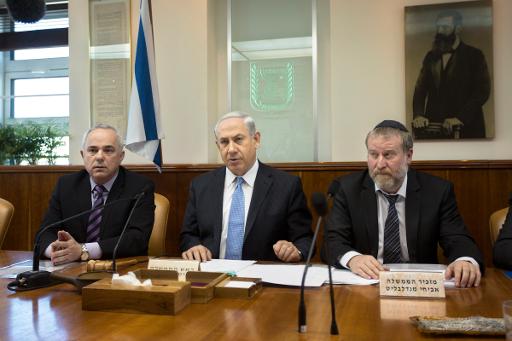 AFP – Israeli Prime Minister Benjamin Netanyahu met with three of his top ministers to discuss ways to deal with the threat of economic boycotts against Israel, media reported Monday.

The meeting comes less than a fortnight after US Secretary of State John Kerry warned that Israel was facing a growing campaign of delegitimisation which could worsen if peace talks with the Palestinians collapsed.

Israeli officials have refused to comment on the reports.

A growing number of governments and international businesses have said they will not trade with Israeli firms with ties to Jewish settlements, highlighting the creeping success of a Palestinian-led boycott campaign.

The so-called BDS movement – boycott, divestment and sanctions – works to convince governments, businesses and celebrities to cut ties with Israeli companies active in the occupied Palestinian territories, in a bid to repeat the success of the boycott which ended apartheid in South Africa.

The boycott has been given added impetus by a European Union decision to block grants and funding for any Israeli entity operating in the occupied territories.

An Israeli foreign ministry official told AFP on Monday there was a crucial difference between the BDS movement and “European states and institutions that have problems with Israel’s actions” in the occupied West Bank.

The BDS was a “fringe group” that effectively “seeks to bring an end to Israel” by calling for the right of return for all Palestinian refugees to Israel, the official said.

Moves by European firms to disengage from Israeli companies with West Bank activities “could not be considered a boycott of Israel” since they continue to invest in the Jewish state, “only choosing in which firms”.